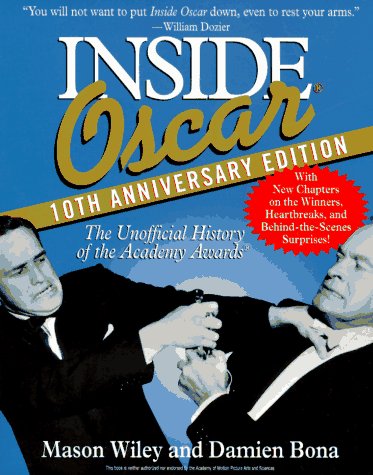 ACCLAIM FOR INSIDE OSCAR
"A giddy social history of our place and time...Mr. Wiley and Mr. Bona have found just the right tone for writing about this most particular of American phenomena."
--Vincent Canby
The New York Times
"This is the book for your film reference library, not merely because it reveals where the bodies are buried, but also because it serves as a useful sociological and aesthetic guide to the Hollywood rat race over the past six decades."
--Andrew Sarris
The Village Voice
"A grand, grotesque Hollywood party, and what a guest list!"
--Michael Musto
Saturday Review
"A fat volume of facts, trivia, trash, and gossip (perfectly fitting for the occasion)."
--Patricia Holt
San Francisco Chronicle
"Gossipy fun and a browser's delight! Everyone may know bits and pieces, but no one has ever gathered this kind of material in such a convenient and diverting format."
--Desmond Ryan
The Philadelphia Inquirer
"The fullest--and funniest--chronicle ever accorded the Golden Guy...a remarkable closeup of Oscar--warts and all."
--Harry Haun
New York Daily News
"There are probably more solid laughs on any ten pages of this book than in the last ten years of Academy Award telecasts."
--Dennis Brown
St. Louis Post-Dispatch
"It may be the only hilariously funny reference book in the world. At whatever point you open it, your total attention is engaged."
--Quentin Crisp
The New York Native