Items related to SOMETHING HAPPENED 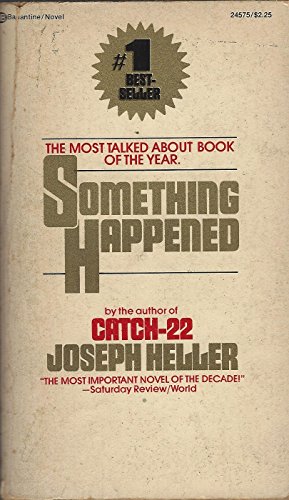 Bob Slocum was a promising executive. He had an attractive wife, three children, a nice house, and as many mistresses as he desired. His life was settled and ordered; he had conformed and society demanded he be happy - or at least pretend to be, But the pretence was becoming more and more difficult, as Slocum's discontent grew into an overwhelming sense of desolation, frustration and fear. And then something happened. . .

"It is splendidly put together and hypnotic to read. It is as clear and hard-edged as a cut diamond. Mr. Heller's concentration and patience are so evident on every page that one can only say that "Something Happened" is at all points precisely what he hoped it would be" (New York Times Kurt Vonnegut)

Considered by some to be an even finer achievement than Catch-22, this is Heller's funny, honest and tragic tale of a failed American dream.