Items related to Freedom and Order: History, Politics and the English...

Freedom and Order: History, Politics and the English Bible 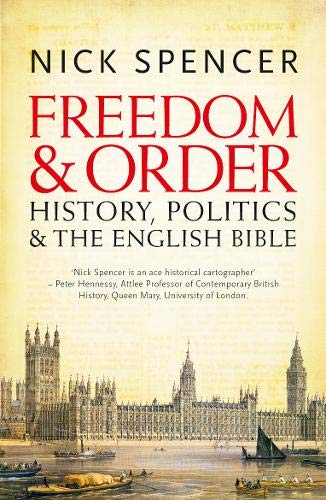 2011 marked the 400th anniversary of the publication of the King James' Bible and saw a great deal of celebration and comment about the impact of the Bible on British culture. Much of the story is well-known, such as the Bible's seminal influence on British language and literature, but one aspect - the influence of the Bible on English politics - is largely unknown or ignored. Moreover, when it is not ignored, the Bible's influence on politics is treated as that from which we have escaped, in order that we may enjoy our current freedoms, rather than something that contributed positively to political thought or history.This is misleading. FREEDOM AND ORDER seeks to inform people of the Bible's critical and positive influence on politics in Britain throughout modern history.

Nick Spencer ranges stylishly over English history from Saint Augustine's landing in Kent to Saint Tony Blair and beyond, richly documenting how this realm of England was a biblically based culture even before the realm of England was invented. Clarity and learning lightly worn make this book stand out from the herd in this year celebrating King James's contribution to biblical translation. (Diarmaid MacCulloch, Professor of the History of the Church, University of Oxford)

For anyone freshly curious to understand that jagged and sometimes bloodstained terrain between religion and politics, Church and State in these islands, this is the book for you. Nick Spencer is an ace historical cartographer of that landscape; a guide of fluency and judgement for those who wish to cross it from the seventh century to the present day. (Lord Peter Hennessy, Attlee Professor of Contemporary British History, Queen Mary, University of London.)

In a book that somehow manages to be both sweeping and concise, Nick Spencer demonstrates just how much the political culture of Britain owes to that massive seedbed of ideas, the Bible. (Tom Holland, historian and author of Rubicon)

The Bible's influence on British politics has been as immense as it has been ignored, and this book uses the unique opportunity of the 400th anniversary of the publication of the King James' Bible to outline and celebrate that influence.

1. Freedom and Order: History, Politics and the English Bible

Book Description Paperback. Condition: Very Good. The book has been read, but is in excellent condition. Pages are intact and not marred by notes or highlighting. The spine remains undamaged. Seller Inventory # GOR006070132

2. Freedom and Order: History, Politics and the English Bible

Book Description Paperback. Condition: Good. The book has been read but remains in clean condition. All pages are intact and the cover is intact. Some minor wear to the spine. Seller Inventory # GOR010414985

3. Freedom and Order: History, Politics and the English Bible

Book Description Hodder Paperbacks, 2012. Paperback. Condition: Used; Good. **Simply Brit** Shipped with Premium postal service within 24 hours from the UK with impressive delivery time. We have dispatched from our book depository; items of good condition to over ten million satisfied customers worldwide. We are committed to providing you with reliable and efficient service at all times. Seller Inventory # 2874478