Items related to Momentum: The Struggle for Peace, Politics and the...

Mowlam, Mo Momentum: The Struggle for Peace, Politics and the People

Momentum: The Struggle for Peace, Politics and the People 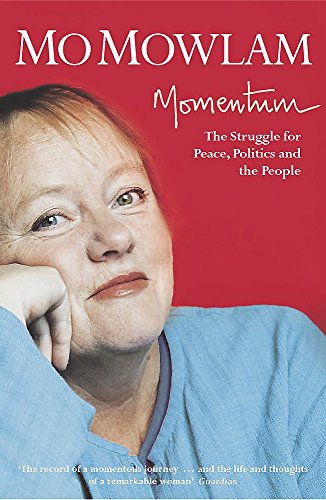 She writes about the months leading up to the 1997 General Election, and Labour’s landslide victory; and what had gone on as she underwent treatment for a brain tumour while working towards that victory. She tells the inside story of her time as Secretary of State for Northern Ireland. The characters and the chemistry of this time are analysed with the candour, warmth and humour that are Mo Mowlam’s trademarks.

After the Good Friday Agreement, Mo Mowlam was, somewhat controversially, moved to the Cabinet Office. Before the second landslide victory of 2001, she decided to leave Westminster politics, and, in MOMENTUM, tells us why – and her hopes and plans for the future.

Few political memoirs have caused quite the stir that Mo Mowlam's Momentum has, and it's not hard to see why. When most accounts of Cabinet ministers' time in office are so desperately anodyne (Margaret Thatcher's Cabinet were famously close-mouthed and unrevealing in their autobiographies--and all quickly sank without trace), Mowlam's book is a work of remarkable passion and frankness. And, more to the point, Mowlam pulls no punches about her turbulent time in Tony Blair's government. It's all here: the clashes, the whispering campaigns, and, yes, the commitment and enthusiasm that have won Mowlam so many admirers.

It's a rare British politician who is as popular with the British public as Mo Mowlam. As Secretary of State for Northern Ireland in the first Labour parliament under Tony Blair, she advanced the peace process towards the Good Friday Agreement unlike few of her predecessors--until she was unceremoniously shifted to a low-key role in the Cabinet office, amid accusations (from Unionists and fellow ministers) that she'd become "too close" to Sinn Fein (Mowlam's blistering passages on these events make for riveting reading).

Her personal demeanour always seemed the antithesis of the duplicity of most politicians (of both the Left and Right) and won her a reputation for unflinching honesty--a quality all too evident here (although it has to be said that many politicians--and not just the enemies identified in this book--have accused her of sour grapes, and have pointed out that the "Saint Mo" image is not the whole truth). But as Momentum makes clear, Mowlam is too clear-sighted a politician to see herself as a saint (her sense of the ridiculous would quickly torpedo such an idea), and while her attacks here on ex-colleagues whom she considered undermined her career are anger filled, they still retain a dispassionate quality that makes for more than simple score-settling. This is a book that may make uncomfortable reading for the government; for the rest of us, it's a wonderfully candid and revealing memoir. --Barry Forshaw

‘The record of a momentous journey ... and the life and thoughts of a remarkable woman’ (Guardian )

‘A highly accessible book likely to appeal to those more interested in the broad sweep of history than the detail of unionist, nationalist or republican theology’ (Irish Times 20020429)

‘Overwhelmingly this book is an intelligent, thoroughly readable account and analysis of the peace process in Northern Ireland’ (Guardian 20020429)

'Mo Mowlam clearly loved her two-and-a-half years as secretary of state for Northern Ireland ... in this lucidly written work she evokes the experience vividly and vibrantly. Her text offers easily the best account of a turbulent decade in the history of the province.' (The Sunday Times 20020429)

Momentum : The Struggle for Peace, Politics and the People

Momentum : The Struggle for Peace, Politics and the People

Momentum : The Struggle for Peace, Politics and the People Mowlam, Mo