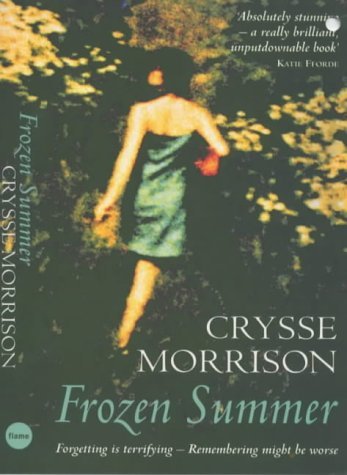 Kirsty wakes in a strange house. She is told this is her home, chosen and decorated by her.

A little girl calls her 'Mummy' - but Kirsty has never seen her before.

A man tells her they are married to each other. She dislikes him. He's not her type at all.

They say she is not Kirsty Middleton, a twenty-year-old photography student. She is Kirsten Villiers, twenty-nine, married, a mother. She slipped, knocked herself out, and now nearly a decade of her life is forgotten. The world has become a frightening place for Kirsty, peopled by strangers who say they know her, and by familiar faces changed by time. Then the devastating secrets of Kirsten Villiers' present begin to reveal themselves and Kirsty starts to understand why amnesia might be preferable to knowing the truth.

1st trAde edition paperback, fine signed by the author In stock shipped from our UK warehouse

Absolutely stunning - a really brilliant, unputdownable book...unconditionally brilliant...[Crysse Morrison has] wrapped a psychological thriller, a voyage of self discovery and a romance into an addictive package (Katie Fforde)

It is a dark, paranoid, edgy thriller which had me completely absorbed from the first page, but it is also so much more satisfying than a simple thriller...a thoroughly modern novel, a suburban fairy tale in which the Sleeping Beauty awakes to find herself alone, fighting for sanity against the dragons of her own past...As facts, discoveries and revelations drop into place one by one, the tension escalates into a climax which is both startling and inevitable (JOANNE HARRIS, author of CHOCOLAT)

It is refreshing to start 2000 with the kind of book that will never go out of fashion: a good psychological thriller, pacily told...with echoes of Helen Dunmore, Morrison's debut proves her a superb storyteller (The Times)