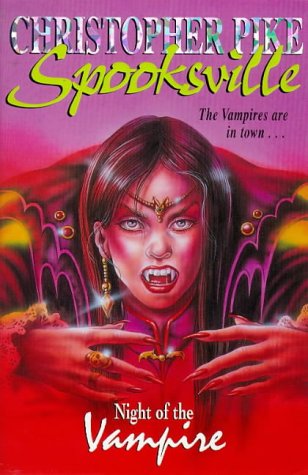 Strange and spooky things happen in Springville. That's why the children of the town call it "Spooksville". There are vampires around and they are hungry for blood. The Queen of the Vampires could save Adam and his friends, but she has another plan. She wants everyone to become a vampire.

Christopher Pike is the pseudonym of Kevin McFadden. He was born in New York, but grew up in Los Angeles, where he lives to this day. Prior to becoming a writer he worked in a factory, painted houses and programmed computers. His hobbies include astronomy, meditating, running and making sure his books are prominently displayed in his local bookshop!

As well as being a bestselling teen horror and thriller writer, he is also the author of numerous titles for adults. Other well-known works include: The Last Vampire series and the Remember Me series.

Book Description Paperback. Condition: Good. The book has been read but remains in clean condition. All pages are intact and the cover is intact. Some minor wear to the spine. Seller Inventory # GOR001034889

Book Description Paperback. Condition: Very Good. The book has been read, but is in excellent condition. Pages are intact and not marred by notes or highlighting. The spine remains undamaged. Seller Inventory # GOR002151050