Items related to Our Greatest Gift: Meditation on Death and Caring

Our Greatest Gift: Meditation on Death and Caring 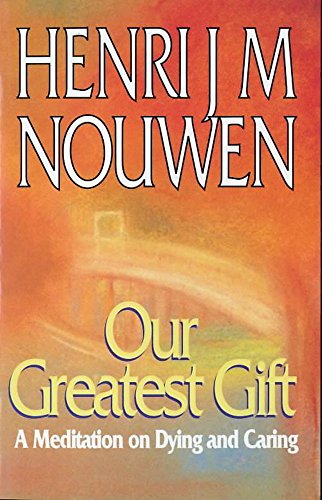 Dying and death bring fear, the experience of dying and caring for the dying can become the deepest experience of love. Henri Nouwen has walked this path with family and friends, and speaks about death as the greatest gift we have. The question he raises is not, "How much can we still do in the years or months we have left to live?", but, "How can we prepare ourselves for our death in such a way that our death can become fruitful in the life of others?".;In these personal reflections, the author hopes to encourage those who are dying to die well and those who care for the dying to care well.

Henri Nouwen (1932-1996) is widely recognised as one of the most influential spiritual writers of the twentieth century. A Dutch-born Catholic priest, professor and pastor, he gained international renown as the author of over forty books on the spiritual life, including such classics as The Wounded Healer, The Inner Voice of Love, The Return of the Prodigal Son, and Life of the Beloved. Nouwen's books have been translated into more than thirty languages and have sold upwards of seven million copies worldwide, resonating with people across the religious, spiritual, cultural and political spectrum. Since his death in 1996, ever-increasing numbers of readers, writers, teachers, and seekers have been guided by his literary legacy.

1. Our Greatest Gift: Meditation on Death and Caring

2. Our Greatest Gift: Meditation on Death and Caring