Items related to The United States and Decolonization: Power and Freedom

The United States and Decolonization: Power and Freedom 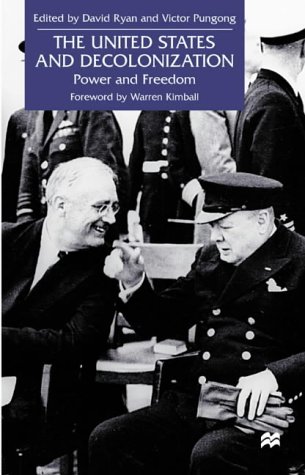 The United States and Decolonization brings a group of leading scholars and young authors together to analyze US foreign policy towards the various processes of decolonization and aspirations for national self-determination from South-East Asia, Malaya, India, the Middle East, Africa and Latin America. The various chapters combine an analysis of the political and diplomatic relationships with the prevailing economic orders. They not only examine the bilateral relationships between Washington and the states of the `Third World', but also the interaction between Washington and the European metropolitan centres and the influence of the Cold War on the process. The late twentieth century was characterized by the rise in the number of new nation-states and by the rise of US power. The relationship between these two phenomena had profound consequences. This collection examines the contributions and the contradictions within US foreign relations across the globe.

DAVID RYAN lectures in International History and US foreign relations at De Montfort University, Leicester. He is the author of US-Sandinista Diplomatic Relations (1995) and a co-author of The History Atlas of North America, as well as numerous articles on US foreign relations.

VICTOR PUNGONG is Senior Political Officer at the Commonwealth Secretariat in London. He has published work on the political and diplomatic aspects of decolonization, including 'The Theoretical Basis and Political Feasibility of the Trusteeship-Peacekeeping Connection' in The Cambridge Review of International Studies, VIII, no.2 (1994).

At an international level the 20th century was characterized by the rise in national self determination in the Third World and by the rise of US power. This book analyzes the dynamics of the changing relationships between the United States and states seeking decolonization, within the contexts of the US relationship with the European colonial powers, the Cold War and the economic system. Its scope is broad in both space and time. This collection of articles brings together leading scholars as well as qualified authors on a subject that was confined in the Cold War paradigm, but ultimately needs to transcend it.

1. The United States and Decolonization: Power and Freedom

Book Description Palgrave Macmillan, 2000. Hardcover. Condition: Good. Connecting readers with great books since 1972. Used books may not include companion materials, some shelf wear, may contain highlighting/notes, may not include cdrom or access codes. Customer service is our top priority!. Seller Inventory # S_267305825