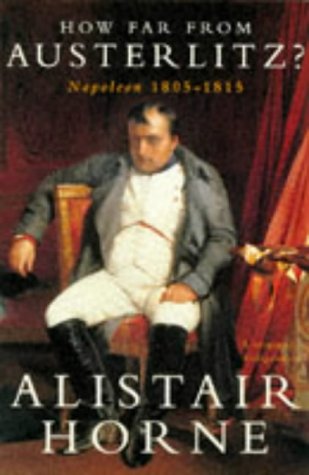 Austerlitz was Napoleon's greatest victory, but it was also the beginning of the end. The success blurred his tactical vision and although there were victories after it, the apogee had been reached and the process has begun which resulted in the 1812 Russian campaign and Waterloo, his last battle.

Sir Alistair Horne was born in London in 1925, and has spent much of his life abroad, including periods at schools in the United States and Switzerland. He served with the R.C.A.F. in Canada in 1943 and ended his war service with the rank of Captain in the Coldstream Guards attached to MI5 in the Middle East. He then went up to Jesus College, Cambridge, where he read English Literature and played international ice-hockey.

After leaving Cambridge, Alistair Horne concentrated on writing: he spent three years in Germany as correspondent for the Daily Telegraph and speaks fluent French and German. His books include Back into Power; Small Earthquake in Chile; The Price of Glory: Verdun 1916 ; and The Seven Ages of Paris. A Savage War of Peace: Algeria 1954–62 won both the Yorkshire Post Book of the Year Prize and the Wolfson History Award in 1978, and he is the official biographer of Harold Macmillan. In 1970, he founded a research Fellowship for young historians at St Antony’s College, Oxford. In 1992 he was awarded the CBE; in 1993 he received the French Légion d’Honneur for his work on French history and a Litt.D. from Cambridge University.