Items related to Shemlan: A History of the Middle East Centre for Arab... 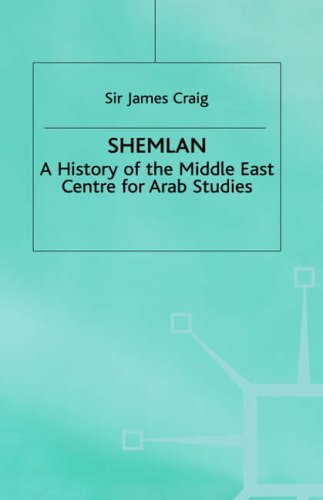 Shemlan, a small, once unknown village in the hills overlooking Beirut, became notorious throughout the Middle East when Bertram Thomas chose it as the location for the Middle East Centre for Arab Studies (MECAS) in 1947. The knowledge that a western government was taking pains to teach its citizens Arabic and inform them of Arab history, society and religion made the Arabs suspicious. The success of MECAS in producing specialists who were the envy of other governments produced doubt and anxiety. The power of MECAS to attract British but also foreign diplomats and businessmen should have made it a profitable enterprise; instead there was constant penny-pinching and reluctance to invest. In retrospect it looks like an excellent idea developed by improvisation through its early troubles which was then allowed to die in its prime. Was it yet another example of a British invention unexploited?

'In his lively, comprehensive and often humorous account, Sir James Craig describes how a good idea was turned into a unique and highly successful enterprise, despite doubts at home and political tensions and conflicts in the region.' - Sir Donald Maitland
'From personal knowledge, the memories of students, and from official documents, [Sir James Craig] has put together an excellent history.' - M.E. Yapp, The Times Literary Supplement

SIR JAMES CRAIG graduated in Oriental languages at Oxford and was then Lecturer in Arabic at Durham University for seven years. After three years as Principal Instructor at MECAS he joined HM Diplomatic Service and served in various Middle Eastern posts, ending as Ambassador to Syria, 1976-79, and to Saudi Arabia, 1979-84. After retirement he was Visiting Professor in Arabic at Oxford, President of the Middle East Association and held several banking and commercial directorships.