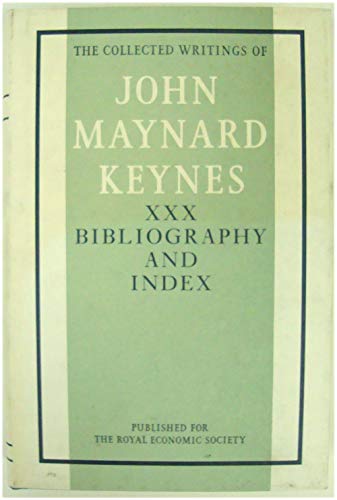 John Maynard Keynes published his first book on economics in 1913 and was still writing at his death in 1946. Both the ways and the language in which not only Keynes himself but also a majority of the world's economists analyzed a problem changed dramatically, largely under his influence. This is the last volume of a 30-volume set of his writings including not only the majority of his books, but journal and newspaper articles, evidence to royal commissions and similar writings. The bibliography lists his work not only in English but in translation into foreign languages, where it was printed and when. it aims to make it possible to see the progressive dissemination of Keynesian ideas throughout the world.

'...among the glories of modern publishing...edited with exemplary authority and lack of fuss...' - London Review of Books

Book Description Cambridge University Press, 1990. Hardcover. Condition: Good. No Jacket. Ex-Library copy with typical library marks and stamps. Dust jacket missing. Shelf and handling wear to cover and binding, with general signs of previous use. This is volume 30 of a 30-volume set. The head and tail of the spine suffer minor shelfwear damage. The binding suffers moderate loosening due to age and wear, but remains secure and in-tact; the pages are clean and unmarked. Secure packaging for safe delivery. Seller Inventory # 1230405910