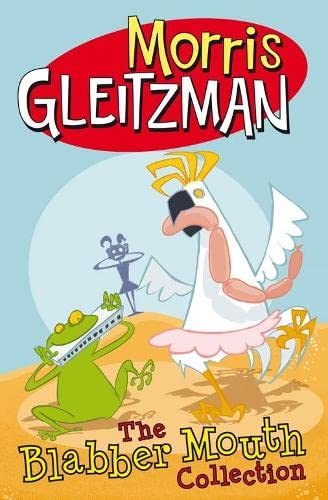 Rowena Batts is always in trouble. It probably has something do with her quick temper – stuffing a frog into bully-boy Darryn Peck’s mouth wasn’t the best idea in the world. Neither was stealing his crazy cockatoo. But Rowena has a bigger problem. Her dad. Somehow she has to tell him that his revolting shirts and his horrific habit of bursting into song in public are even more disastrous than she is. And it’s not easy talking your way out of trouble when you were born unable to speak . . .

Rowena and her dad rock from one batty but bittersweet scenario to the next, across all three books.

Three hilarious but heartwarming stories in one book, from one of Australia's bestselling authors, and featuring a very unusual and outspoken heroine . . .

Morris Gleitzman was born in England, but has lived in Australia since 1969. He has worked as everything from a frozen-chicken thawer and department-store Santa to a newspaper columnist and freelance screenwriter. Then in 1985 he wrote his first novel for young people. Now he's one of Australia's favourite children's authors, with a large following in Britain and many other countries. His most successful titles include TWO WEEKS WITH THE QUEEN and ONCE.

BLABBER MOUTH and STICKY BEAK – two of the titles in this bind-up – were adapted for Channel 4 television when they were first published and won an International Emmy.

Book Description Paperback. Condition: Very Good. The book has been read, but is in excellent condition. Pages are intact and not marred by notes or highlighting. The spine remains undamaged. Seller Inventory # GOR002691534

Book Description Macmillan Children's Books, 2008. Condition: Good. Ships from the UK. Former Library book. Shows some signs of wear, and may have some markings on the inside. Seller Inventory # GRP20030851

Book Description Macmillan Children's Books 04/04/2008, 2008. Condition: Very Good. Shipped within 24 hours from our UK warehouse. Clean, undamaged book with no damage to pages and minimal wear to the cover. Spine still tight, in very good condition. Remember if you are not happy, you are covered by our 100% money back guarantee. Seller Inventory # 6545-9780330452939

Book Description Macmillan Children's Books 04/04/2008, 2008. Condition: Very Good. This book is in very good condition and will be shipped within 24 hours of ordering. The cover may have some limited signs of wear but the pages are clean, intact and the spine remains undamaged. This book has clearly been well maintained and looked after thus far. Money back guarantee if you are not satisfied. See all our books here, order more than 1 book and get discounted shipping. . Seller Inventory # 7719-9780330452939

Book Description Macmillan Children's Books, 2008. Paperback. Condition: Used; Good. **Simply Brit** Shipped with Premium postal service within 24 hours from the UK with impressive delivery time. We have dispatched from our book depository; items of good condition to over ten million satisfied customers worldwide. We are committed to providing you with reliable and efficient service at all times. Seller Inventory # mon0001670143

Book Description Macmillan Children's Books, 2008. Paperback. Condition: Used; Good. **SHIPPED FROM UK** We believe you will be completely satisfied with our quick and reliable service. All orders are dispatched as swiftly as possible! Buy with confidence!. Seller Inventory # mon0002129334