Items related to The Triumph of the Sun: A Novel of African Adventure...

Smith, Wilbur The Triumph of the Sun: A Novel of African Adventure (The Courtneys)

The Triumph of the Sun: A Novel of African Adventure (The Courtneys) 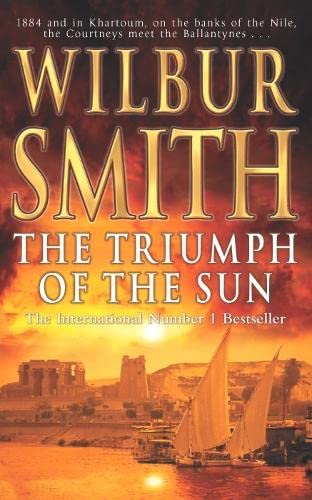 In the Sudan, decades of brutal misgovernment by the ruling Egyptian Khedive in Cairo precipitate a fierce and bloody rebellion and Holy War headed by a charismatic new religious leader, The Madhi or "Expected One". The British are forced to intervene to protect their national interests and to attempt to rescue the hundreds of British subjects stranded in the country.

Along with hundreds of others, British trader and businessman, Ryder Courtney is trapped in the capital city of Khartoum. It is here that he meets Captain Penrod Ballantyne of the 10th Hussars, as well as the British Consul, David Benbrook and his three beautiful daughters. Against the vivid and bloody backdrop of the siege of Khartoum, in which British General Charles George Gordon is killed and the British retreat, these three powerful men fight to survive.

'A fine storyteller . . . TRIUMPH OF THE SUN is one of his very best'

1. The Triumph of the Sun

2. THE TRIUMPH OF THE SUN