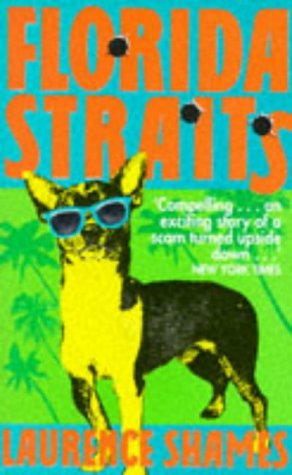 For a second division conman looking for the big score, Key West has everything New Yorker Joey Goldman has ever dreamed of: sun, surf, sleaze and more scams per mile of waterfront than any crime centre on earth. The only trouble is, Joey's half-brother got there first. And screwed up.

Laurence Shames has been a New York City taxi driver, lounge singer, furniture mover, lifeguard, dishwasher, gym teacher, and shoe salesman. Having failed to distinguish himself in any of those professions, he turned to writing full-time in 1976 and has not done an honest day's work since. His basic laziness notwithstanding, Shames has published more than twenty books and hundreds of magazine articles and essays. Best known for his critically acclaimed series of Key West novels, he has also authored non-fiction and enjoyed considerable though largely secret success as a collaborator and ghostwriter. Shames has penned four New York Times bestsellers. These have appeared on four different lists, under four different names, none of them his own. This might be a record. Born in Newark, New Jersey in 1951, to chain-smoking parents of modest means but flamboyant emotions, Shames graduated summa cum laude from NYU in 1972 and was inducted into Phi Beta Kappa. Shortly after finishing college, he began annoying editors by sending them short stories they hated. He also wrote longer things he thought of as novels. He couldn't sell them. By 1979 he'd somehow passed himself off as a journalist and was publishing in top-shelf magazines like Playboy, Outside, Saturday Review, and Vanity Fair. In 1982, Shames was named Ethics columnist of Esquire, and also made a contributing editor to that magazine. By 1986 he was writing non-fiction books whose critical if not commercial success first established his credentials as a collaborator/ghostwriter. His 1991 national bestseller, BOSS OF BOSSES, written with two FBI agents, got him thinking about the Mafia. It also bought him a ticket out of New York and a sweet little house in Key West, where he finally got back to Plan A: writing fiction. Given his then-current preoccupations, the novels--beginning with FLORIDA STRAITS--naturally featured palm trees, high humidity, dogs in sunglasses, and blundering New York mobsters. Having had the good fortune to find a setting he loved and a wonderfully loyal readership as well, Shames wrote eight Key West novels during the 1990s, before taking a decade-long detour into screenwriting and collaborative work. In 2013, he returned to his favorite fictional turf with SHOT ON LOCATION--a suspenseful and hilarious mix of Hollywood glitz and Florida funky. TROPICAL SWAP, Shames’ tenth Key West novel, tells the riotous tale of a home exchange that sounds too good to be true, and is.

's flying south for the winter. The  second-string New York wiseguy just packed up his  faithful girlfriend Sandra and took off for Key  West -- land of sun, surf and sleaze -- where a  small-time hustler in search of a racket can score the  big one. If he can find it. Enter Joey's half  brother Gino. On the lam from the mob after one of  the most royally screwed-up jewel heists in Florida  history, Gino's a man in need of a fall guy.  Which is where Joey comes in . .  .
Suddenly, everyone's after Joey -- including the  ruthless Miami don who wants his three million worth  of uncut emeralds and who just dispatched his goons  to deliver Joey a one-way ticket -- out. Now  Joey's where he always wanted to be -- in the big time.  All he has to do is find out where the stones are  stashed. And for an unikely hero out to ma