Items related to A Dictionary Of Political Thought (Pan reference) 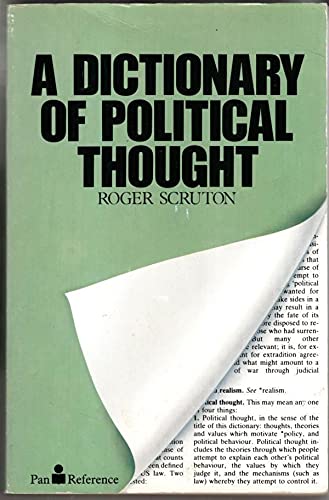 A revised edition of a political dictionary, first published in 1982, which covers recent changes such as the collapse of Communism, the rise of nationalism in Eastern Europe and continued integration in Western Europe.

'It is much more than a dictionary, and is in fact more akin an encyclopaedia in terms of content...an essential reference work that should be available in all government, public and academic libraries.' Terry O'Brien, Reference Reviews

ROGER SCRUTON is a writer, philosopher and public commentator. He engages in contemporary political and cultural debates from the standpoint of a conservative thinker and is well known as a powerful polemicist. He has written widely in the press on political and cultural issues. He is currently research professor for the Institute for the Psychological Sciences where he teaches philosophy at their graduate school in both Washington and Oxford. He is also a visiting professor at Princeton University teaching a course offered jointly through the politics and philosophy departments.