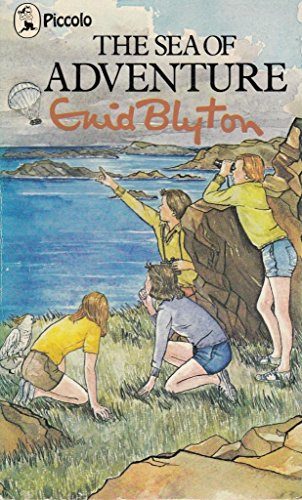 The Sea of Adventure is the fourth exciting instalment in the Adventure series by Enid Blyton, one of the best-loved children's writers of all time.

A mysterious trip to the desolate Northern Isles soon turns into a terrifying adventure when Bill is kidnapped!

Marooned far from the mainland on a deserted coast, Philip, Dinah, Lucy-Ann, Jack and Kiki the parrot find themselves playing a dangerous game with an unknown enemy. Will they escape with Bill and their lives?

The Sea of Adventure is a children's classic from Enid Blyton, with a beautifully illustrated cover from rising picture-book star Rebecca Cobb.

Enid Blyton, who died in 1968, is one of the most successful children’s authors of all time. She wrote over 700 books, which have been translated into more than forty languages and have sold more than 400 million copies around the world. Enid Blyton’s stories of magic, adventure and friendship continue to enchant children the world over. Enid Blyton’s beloved works include The Famous Five, The Secret Seven, Malory Towers, The Faraway Tree and Adventure series.

Rebecca Cobb is a rising star in children's picture books. Having collaborated on two picture storybooks with the Orange Prize winner Helen Dunmore, Rebecca's debut solo project, the hugely accomplished and heart-breakingly beautiful Missing Mummy, was published by Macmillan in 2011. The gorgeously funny and well-received Lunchtime followed and, in addition, Rebecca's stunning illustrations accompanied Julia's Donaldson's wonderfully lyrical story in The Paper Dolls. Aunt Amelia, Rebecca Cobb's third picture book, is every bit as warm, engaging and original as her existing books, and is sure to continue to establish her as a real 'one to watch'. Rebecca lives in Cornwall.