Items related to When the Lion Feeds (The Courtneys)

Smith, Wilbur When the Lion Feeds (The Courtneys)

When the Lion Feeds (The Courtneys) 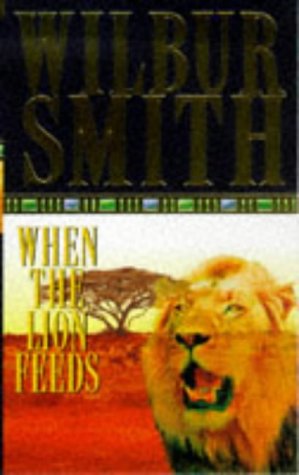 One of the world's great storytellers, Wilbur Smith captivates readers' imaginations in this classic novel of passion, adventure, and one man's destiny."ON A CONTINENT WHERE MAGNIFICENT RICHES WERE HIDDEN..."He began life at his twin brother's side, soon running wild on his father's ranch on the edge of Africa. But violence, desire, and fate sent Sean Courtney into exile--where he would fight and love his way to extraordinary success and heartbreaking failure..."LIVES WOULD BE LIVED AND LOST."In a place called the Ridge of White Waters, Sean made a life-long friendship, mined a fortune in gold, and met his own demons. Then an act of cunning betrayal struck--and ignited a new adventure to a new frontier."AND TO THE DARING WENT THE GREATEST FORTUNE OF ALL..."From facing the murderous charge of a towering bull elephant to watching men die unspeakable deaths, Sean fought new enemies, forged new allies--and dreamed of establishing a family on a farm of his own. But the young man who had lived by his courage, sweat, and blood was about to discover that the past still had its claws in him..."Smith [is] a rare author who wields a razor-sharp sword of craftsmanship."--"Tulsa World"" "

'Plenty of incident and colour' - "The Observer", 1966'Pride of place goes to "When the Lion Feeds" because it is bigger, wider and more full of plot than all the others put together ...' - "The Daily Telegraph", 1966'Wilbur Smith has built up his wide-screen adventure story with energy and shrewdness.' - "Sunday Times", 1966'Mr. Smith is a natural story-teller who moves confidently and often splendidly in his period and sustains a flow of convincing incident without repeating his excitement.' - "The Scotsman", 1966'A very impressive book in its wide scope and its descriptive colour.' -" Sphere" Praise for Wilbur Smith"Smith is a master." "--Publishers Weekly""One of the world's most popular adventure writers." "--The Washington Post Book World""A rare author who wields a razor-sharp sword of craftsmanship." "--Tulsa World""Wilbur Smith is one of those benchmarks against whom others are compared." "--The Times" (UK) "Best Historical Novelist--I say Wilbur Smith, with his swashbuckling novels of Africa. The bodices of rip and the blood flows. You can get lost in Wilbur Smith and misplace all of August."--Stephen King"Action is Wilur Smith's game, and he is a master."--"The Washington Post Book World""The world's leading adventure writer." "--Daily Express" (UK)"Wilbur Smith rarely misses a trick."--"Sunday Times""Smith is a captivating storyteller." "--The Orlando Sentinel""No one does adventure quite like Smith." --"Daily Mirror "(UK) "A thundering good' read is virtually the only way of describing Wilbur Smith's books." --"The Irish Times"

The bestselling novel that launched Wilbur Smith's bestselling career, this is the first in the riveting saga of the Courtney brothers

When the Lion Feeds

When the Lion Feeds