Items related to A Song For Nero

A Song For Nero 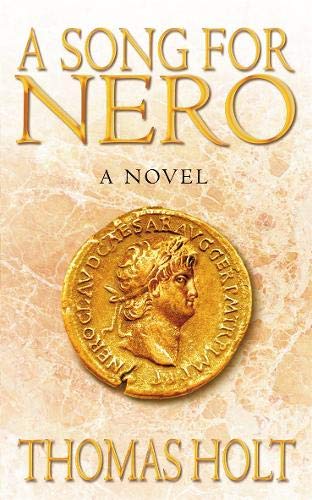 History tells us that in 69AD, at the ripe old age of 32 and on hearing that General Glaba's forces were closing in, Nero fled his palace in Rome. He stabbed himself in the throat with a pen and was trampled to death by horses in a muddy ditch. His last words were, 'What an artist dies with me'.

But there is another possibility: Nero did not die in that ditch, but somebody who looked very much like him did. This gives Nero the opportunity to start a new life in pursuit of his first love: music. But there's a problem - Nero is being pursued by two people who have reason to suspect he is still alive - one wants him dead, the other is a passionate fan of his dreadful music and wants his genius recognised ...

Thomas Holt provides us, in A Song for Nero, with one of the more ingeniously unlikely what-ifs of the modern historical novel: what if the body rebel troops found and dishonoured was not that of the deposed emperor Nero, but that of his official double, Callistus? A decade later, he and Callistus's mouthy younger brother Galen are still wandering the provinces of the empire, living hand to mouth and scam to scam--in some ways, a more inventive punishment for a tyrant than any court could imagine.

Holt's Nero is a fascinating set of contradictions, a fairly likable man in recovery from the total corruption of absolute power and keen to deny his worst crimes, or at least play them down. The petty crook Galen is the ideal foil for him, someone who cannot quite believe that his companion once did those things. And then their problems start. Not everybody thinks Nero is really dead, and there are all sorts of people with a use for him.

Like Holt's other historical novels, this one combines some of the inventive wit of his fantasies with real knowledge of the Classical period and a dark sense of irony; its principal weakness--some very routine thriller plotting--does not diminish the effectiveness of this distinctive tone of voice. --Roz Kaveney

Buy Used
Condition: Fair
Spine of book is loose and dust... Learn more about this copy

Book Description Time Warner Books Uk. Condition: Acceptable. Spine of book is loose and dust jacket is torn. Hardcover The item is fairly worn but still readable. Signs of wear include aesthetic issues such as scratches, worn covers, damaged binding. The item may have identifying markings on it or show other signs of previous use. May have page creases, creased spine, bent cover or markings inside. Packed with care, shipped promptly. Seller Inventory # B-04-0823

Book Description Little, Brown, 2003. Hardcover. Condition: Good. Darkened tan to page edges Good condition is defined as: a copy that has been read but remains in clean condition. All of the pages are intact and the cover is intact and the spine may show signs of wear. The book may have minor markings which are not specifically mentioned. Most items will be dispatched the same or the next working day. Seller Inventory # wbb0014028426

Book Description Little Brown, UK, 2003. Hardback. Condition: Very Good. Dust Jacket Condition: Very Good Unclipped. First. Very good clean tight book - no marks/inscriptions. Very light tanning to page block. Jacket is very good unclipped, but with creasing to top corner of inside flap. History tells us that, in 69AD the Emperor Nero fled his palace in Rome, stabbed himself in the throat and was trampled by horses and left to die in a muddy ditch. Or did he? Size: 8vo - over 7ľ" - 9ľ" tall. Historical Novel. Seller Inventory # 005428

Book Description Paperback. Condition: Very Good. The book has been read, but is in excellent condition. Pages are intact and not marred by notes or highlighting. The spine remains undamaged. Seller Inventory # GOR002663576