Items related to White Heat: A History of Britain in the Swinging Sixties

Sandbrook, Dominic White Heat: A History of Britain in the Swinging Sixties

White Heat: A History of Britain in the Swinging Sixties 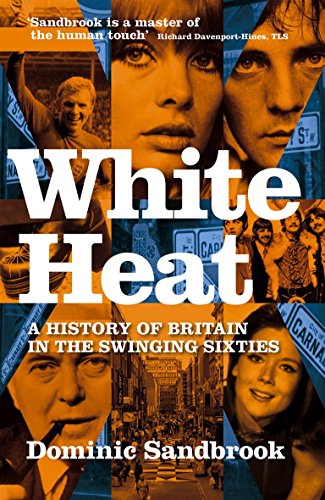 Few could have missed Dominic Sandbrook's breathtaking debut NEVER HAD IT SO GOOD, which received exceptional reviews across the board. In WHITE HEAT he takes his history of Britain from the election of Harold Wilson through the heart of 'Swinging London' to its conclusion in 1970, when the government fell, the Beatles broke up and the English football team lost the World Cup.
The memories and images of these heady days still resonate today: Mods and Rockers, mop-tops and mini-skirts, strikes and demonstrations, James Bond and The Avengers, Carnaby Street and the King's Road. So too do the colourful personalities who dominated the era: Harold Wilson and Edward Heath, Mary Quant and Jean Shrimpton, Enoch Powell and Mary Whitehouse, Marianne Faithfull and Mick Jagger.
As gripping and as meticulously researched as NEVER HAD IT SO GOOD, WHITE HEAT will establish Dominic Sandbrook as the foremost historian of modern Britain at work today.

Dominic Sandbrook’s White Heat (subtitled A History of Britain in the Swinging Sixties) is a mesmerising piece of reportage -- detailed, authoritative and written with the kind of vividness that brings the period to vibrant life, both for those who lived through it, and for those to whom it is as remote as ancient history. And weighing in at nearly a thousand pages, it is as comprehensive as one could wish, dealing with revolutions in the arts (the Beatles, of course, are central -- and iconic -- figures here), as well as the relentless bloodletting in Northern Ireland, and political scandals in Westminster (the John Profumo/Christine Keeler affair being the most significant). The book quotes on it jackets Harold Wilson's much-repeated comment ‘Britain that is going to be forged in the white heat of this revolution’ -- and Sandbrook, taking his title from this quote, makes the strongest possible case for this being a revolutionary period -- even if several of the revolutions involved (such as the hippie-inspired ‘Summer of Love’) actually came to nothing. The changes in society during this period were seismic: cultural and political (as mentioned above), but also technological. In the sports arena, Britain featured a resounding World Cup triumph in 1966).

In many ways, as the author demonstrates, Britain became a significant player again in this era and featured once again on the world stage in a fashion it had not achieved in the 1950s. But the outward accoutrements of these revolutions in society nurtured some clandestine (and less palatable) undercurrents, and Sandbrook anatomises these with quite as much skill as he devotes to the more celebratory sections of the book. The range of references involved is quite stunning, and the period concentrated on (1964 to 1970) is not likely to receive such a comprehensive airing again. --Barry Forshaw

An active pleasure to read. This is a deftly written and evocative account of the day before yesterday ... (Peter Hitchens, MAIL on Sunday, Books of The Year)

This is history of a commendably inclusive range (SUNDAY TIMES)

This second volume lives up to the promise of the first ... Sandbrook is an inveterate demolisher of myths (INDEPENDENT ON SUNDAY)

1. White Heat: A History of Britain in the Swinging Sixties