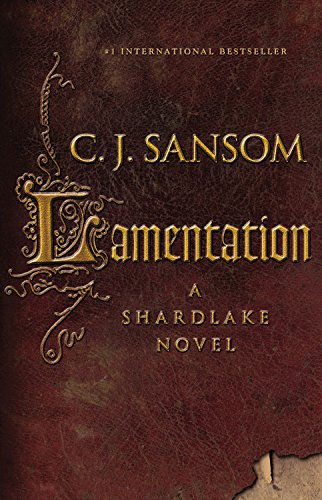 As Henry VIII lies on his deathbed, an incendiary manuscript threatens to tear his court apart.
Summer, 1546. King Henry VIII is slowly, painfully dying. His Protestant and Catholic councilors are engaged in a final and decisive power struggle; whoever wins will control the government. As heretics are hunted across London, and radical Protestants are burned at the stake, the Catholic party focuses its attack on Henry's sixth wife--and Matthew Shardlake's old mentor--Queen Catherine Parr.
Shardlake, still haunted by his narrow escape from death the year before, steps into action when the beleaguered and desperate Queen summons him to Whitehall Palace to help her recover a dangerous manuscript. The Queen has authored a confessional book, Lamentation of a Sinner, so radically Protestant that if it came to the King's attention it could bring both her and her sympathizers crashing down. Although the secret book was kept hidden inside a locked chest in the Queen's private chamber, it has inexplicably vanished. Only one page has been recovered--clutched in the hand of a murdered London printer.
Shardlake's investigations take him on a trail that begins among the backstreet printshops of London, but leads him and his trusty assistant Jack Barak into the dark and labyrinthine world of court politics, a world Shardlake swore never to enter again. In this crucible of power and ambition, Protestant friends can be as dangerous as Catholic enemies, and those with shifting allegiances can be the most dangerous of all.

This gripping new novel by the inventive C. J. Sansom shows that, when it comes to intriguing Tudor-based narratives, Hilary Mantel has a serious rival. Mantel isn't the only novelist to keep the Tudor flag flying in the bestseller lists. The first two novels in her Thomas Cromwell trilogy - Wolf Hall (2009) and Bring Up the Bodies (2012) - have won phenomenal acclaim as well as two Man Booker prizes. But years before she began that enterprise C. J. Sansom had embarked on a brilliantly inventive Tudor fiction sequence, whose five novels have brought him an enormously enthusiastic and widespread readership, too. Like Mantel's, Sansom's first two novels - Dissolution (2003) and Dark Fire (2004) - are set during Cromwell's time as Henry VIII's chief minister. But, in contrast to her mannered approach and enthralled fixation on Cromwell, his fiction has a far faster narrative pace and fans out across a much broader field. Ingeniously, it achieves this by combining a keen scholarly intelligence with the suspense and surprises of the detective genre. A Scottish historian who had a career in law before turning to fiction, Sansom finds an ideal protagonist in Matthew Shardlake, the humane hunchbacked lawyer-sleuth in his Tudor novels. He also finds the Tudor period intensely congenial to his imagination. Atmospheres of oppression and wariness, in which careless words or an ill-advised allegiance can be fatal, engross Sansom. Exploring different types of fiction, he has published two non-Tudor novels - Winter in Madrid (2006), a spy story located in the traumatised Spanish capital after the civil war, and Dominion (2012), an "alternate history" set in a 1952 Britain which is a dingy satellite of the Third Reich. Franco and Hitler loom over terrorised societies in both these books. In his Tudor novels, Henry VIII does so. A 16th-century portrait of Catherine Parr: Sansom is fascinated by Henry VIII's sixth wife. Sansom likes to vary his fiction's forms, and the Shardlake novels range from a closed-community whodunit in a snowbound monastery (Dissolution) to the quest for a deadly weapon of war (Dark Fire), a political thriller (Sovereign, 2006), a serial-killer story (Revelation, 2008) and a legal thriller (Heartstone, 2010). What unites them is the havoc wreaked by Henry VIII's brutal ideological vacillations, as the nation is ripped apart by sectarian fanaticism and splendours of ecclesiastical architecture are reduced to rubble . . . Partly a detective story as Shardlake solves the how and why of the theft, partly a thriller with casualties mounting in the search for the book's whereabouts, partly a panoramic re-creation of the turbulent London of 1546, from the court's gilded warren of intrigue to publishers' makeshift huts in the shadow of St Paul's, Lamentation is sure to give Sansom's many fans further cause for jubilation. (Sunday Times)

Shardlake's back and better than ever . . . The plot and pacing make this the best Shardlake yet . . . it is a vision of how individuals find the moral courage to fight injustice which links the Shardlake novels to Sansom's other fictions, Winter in Madrid and Dominion. Lamentation, like its predecessors, is a triumph both as detective fiction and as a novel . . . Sansom's deep feeling for the psychology of religious faith and for the defenceless, makes him, in my view superior to Hilary Mantel. (Independent on Sunday)

Lamentation starts with the burning of heretics, and the smell of fear and dissent infuses the whole novel . . . Sansom is highly skilled at weaving together the threads of his plot with the real and riveting history . . . Lamentation is a wonderful, engaging read. The atmosphere of fear and suspicion is brilliantly rendered. Shardlake is always convincing, and he is endearingly battle-scarred and weary from his earlier adventures. The real characters are well drawn, especially Catherine Parr and the young Elizabeth, who makes a striking cameo appearance. Sansom cleverly keeps the king just off stage for most of the novel. We can sense him lurking in the shadows - a monstrously obese and malevolent presence. As the plot draws to a clever and satisfying conclusion, Sansom gives us a clue about where the king's death will take Shardlake; and it is a spine-tingling prospect. (The Times)

As always, Sansom conjures the atmosphere, costumes and smells of Tudor London with vigour, from the gilded halls of Whitehall Palace to the dungeons of the Tower . . . once Shardlake finds himself in real jeopardy [the novel] quickly picks up pace, all the way to a shocking climax that promises to mark a new chapter for Shardlake, and for England. (Observer)

Sansom brilliantly conveys the uncertainty of the time when a frail young prince would ascend the throne with different factions fighting for regency . . . Sansom has the gift of plunging us into the different worlds of the period: the premises of a struggling young printer whose only asset is his press, a dangerous possession when this newfangled invention could implicate the printer in treason and heresy . . . There is a sadness about this novel which suggests that Shardlake's own world is breaking up - his great companion, Barak, who provides the physical strength the disabled lawyer lacks, gets into fearful straits - but it ends on a hopeful note for the many followers of this splendid series, which combines the imaginative insights of fiction with scholarly research. We see Shardlake carried safely downriver to join the budding court of the young Elizabeth, auguring well for his future. (Independent)

So engrossing is the tale that I didn't pause long enough to take a note. Even when judged by the high standards of the earlier Shardlake novels, this one stands out - not least because it successfully maintains suspense for over 600 pages . . . It is a mark of authorial self-discipline that Sansom wears his considerable historical research lightly, subordinating it to character and action. As in the earlier volumes, historical figures such as Richard Rich and the young William Cecil are successfully evoked without typecasting or self-indulgence disguised as empathy. There are also some memorable minor characters, such as the tragic and vexatious litigant, Isabel Slanning, who contribute to the sinuously-unfolding story in often unexpected ways. The orchestration of plot over 600 pages, and the final twist, is literary craft of a high order. Historical fiction - especially historical crime fiction - has often been regarded as a literary branchline, interesting and picturesque but not quite the real thing. This now is changing, and rightly, since the qualities required to evoke imagined historical worlds are precisely those involved in rendering the present. With the Shardlake series, and with this volume in particular, Sansom has surely established himself as one of the best novelists around. (Spectator)

This is a terrific book . . . It is a convincing account of a cruel and fascinating period and a very exciting read. (Literary Review)

...the Tudor Holmes finds himself plunged into crisis at the English Court...Sansom
recreates a fascinating era as he carries the reader along with Shardlake on his diligent and
perilous quest, criss-crossing medieval London from the luxury of the royal palaces at
Whitehall to the filthy backstreets of the city.

...a dark and atmospheric story... Shardlake deserves his wide and rapturous readership. (Antonia Senior The Times)

Sansom has an extraordinary gift for atmosphere: he immerses the reader in the sights, sounds, smells and dreadful paranoia of life in the last days of Henry VIII . . . Utterly gripping (Marian Keyes Irish Times, Books of the Year) Book Description:

The eagerly anticipated Shardlake novel from the number one bestselling author.