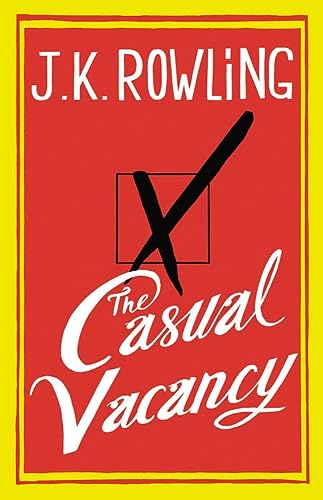 Praise for THE CASUAL VACANCY:

"I had come under the spell of a great novel....A big, ambitious, brilliant, profane, funny, deeply upsetting and magnificently eloquent novel of contemporary England, rich with literary intelligence....This is a deeply moving book by somebody who understands both human beings and novels very, very deeply."--Lev Grossman, Time

"A vivid read with great, memorable characters and a truly emotional payoff....Rowling captures the humanity in everyone, even if that humanity is not always a pretty sight."--People

"This book represents a truckload of shrewdness.... There were sentences I underlined for the sheer purpose of figuring out how English words could be combined so delightfully....genuinely moving."--Washington Post

"An insanely compelling page-turner....The Casual Vacancy is a comedy, but a comedy of the blackest sort, etched with acid and drawn with pitch....Rowling proves ever dexterous at launching multiple plot lines that roar along simultaneously, never entangling them except when she means to. She did not become the world's bestselling author by accident. She knows down in her bones how to make you keep turning the pages."--The Daily Beast

"There are plenty of pleasures to be had in The Casual Vacancy....Parts of the story would be tonally of a piece with any Richard Price or Dennis Lehane novel, or an episode of The Wire."--Parade

"Rowling knows how to write a twisty, involving plot....She is clearly a skilled writer."--The Huffington Post