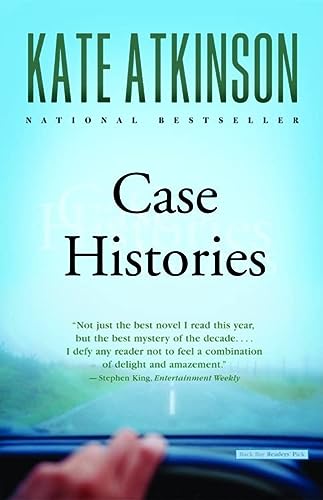 Case one: A little girl goes missing in the night.

Case three: A new mother finds herself trapped in a hell of her own making - with a very needy baby and a very demanding husband - until a fit of rage creates a grisly, bloody escape.

"CASE HISTORIES is so exuberant, so empathetic, that it makes most murder-mystery page-turners feel as lifeless as the corpses they're strewn with."--Jacqueline Carey, New York Times Book Review

"One of the most enjoyable books in a long time."--Leslie McGill, Kansas City Star

"Not just the best novel I read this year, but the best mystery of the decade. . . . I defy any reader not to feel a combination of delight and amazement."--Stephen King, Entertainment Weekly

"CASE HISTORIES combines the suspense of a whodunit with the richly textured plot of a sprawling family saga. The result is top-notch literature - an unforgettable, unclassifiable read."--Elisabeth Egan, Chicago Sun-Times

Book Description Back Bay Books, 2005. Paperback. Condition: New. Paperback. Case one: A little girl goes missing in the night."Case two: " A beautiful young office worker falls victim to a maniac's apparently random attack."Case three: " A.Shipping may be from multiple locations in the US or from the UK, depending on stock availability. 310 pages. 0.304. Seller Inventory # 9780316010702