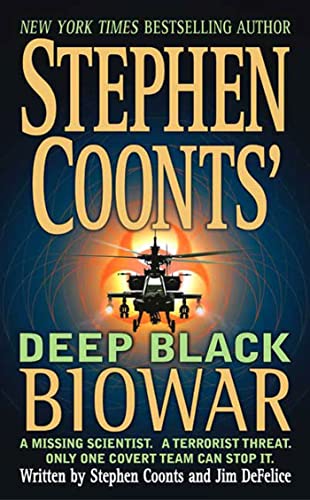 "Coonts knows how to write and build suspense...this is the mark of a natural storyteller."
--The New York Times Book Review

Dr. James Kegan, a world-renowned scientist specializing in germ warfare, has vanished from his upstate New York home. But this is no ordinary missing-persons case. Kegan has left behind an unidentified dead man with a .22 caliber hole in his skull-and a contact trail that leads to an alleged terrorist cell.

Unraveling the mystery is a job for Kegan's best friend, NSA operative Charlie Dean. His mission is to infiltrate the scientist's circle of associates and decipher Kegan's confidential research. Dispatched to cover Charlie is Delta Force trooper Lia Francesca. The trail leads them to the core of a widespread killer fever that's been dormant for centuries-and its link to a virus that's quickly spreading victim by victim. With time running out Charlie and Lia must find Kegan, uncover his secrets, cut a terrorist threat to the quick, and stop the unimaginable outbreak of a new biological nightmare.

"The master of the techno thriller."
-Publishers Weekly

Author of 13 New York Times Bestsellers, Stephen Coonts flew A-6 Intruders from the deck of the USS Enterprise during the Vietnam War. A graduate of West Virginia University and the University of Colorado School of Law, he and his wife Deborah still fly whenever they have the time. They reside in Las Vegas, Nevada.

Jim DeFelice has written several techno-thrillers, including "Cyclops One." His next book, "Final Four," is set for publication later this year. He lives in upstate New York with his wife and young son.