Items related to The Man Who Killed Boys

The Man Who Killed Boys 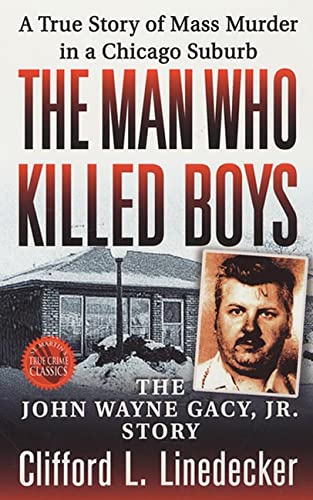 A true story of mass murder in a Chicago suburb. Successful businessman, community benefactor, good friend and neighbor-- and perverted mass murderer. Over a period of three years, John Wayne Gacy, Jr. sexually tortured and murdered 33 boys. His friends and neighbors in his unassuming Illinois community never suspected a thing. Gacy was a Jekyll-and-Hyde figure, leading an outwardly normal life, but secretly brutalizing dozens of young men in a hidden lair, and concealing their bodies under the floorboards of his suburban home. Through extensive personal interviews with those who knew Gacy, veteran true-crime scribe Clifford L. Linedecker takes us on a shocking ride through Gacy's life, delving deep into the man's troubled past, recounting his appalling series of murders, and recreating the drama of his trial-- which resulted in his execution by lethal injection in 1994. Gruesome and horrifying, "The Man Who Killed Boys" reveals stark terror set amid the daily lives of an ordinary community. Documented with an 8-page photo archive

"The John Gacy murder case is filled with facts and accusations so fiendish and bizarre that they might have shocked Edgar Allan Poe...A sensational crime story that evokes both curiosity and revulsion."--"Chicago Tribune"