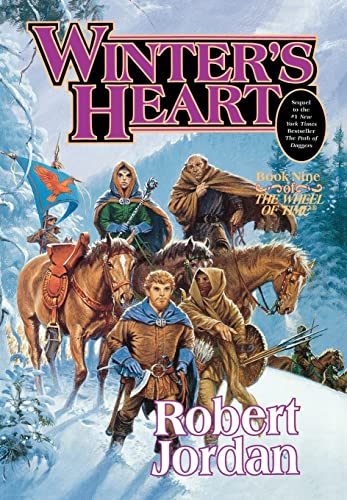 The Wheel of Time (R) is a PBS Great American Read Selection! Now in development for TV!

Since its debut in 1990, The Wheel of Time(R) by Robert Jordan has captivated millions of readers around the globe with its scope, originality, and compelling characters.

The Wheel of Time turns and Ages come and go, leaving memories that become legend. Legend fades to myth, and even myth is long forgotten when the Age that gave it birth returns again. In the Third Age, an Age of Prophecy, the World and Time themselves hang in the balance. What was, what will be, and what is, may yet fall under the Shadow.

Rand is on the run with Min, and in Cairhein, Cadsuane is trying to figure out where he is headed. Rand's destination is, in fact, one she has never considered.

Mazrim Taim, leader of the Black Tower, is revealed to be a liar. But what is he up to?

Faile, with the Aiel Maidens, Bain and Chiad, and her companions, Queen Alliandre and Morgase, is prisoner of Savanna's sept.

Perrin is desperately searching for Faile. With Elyas Machera, Berelain, the Prophet and a very mixed "army" of disparate forces, he is moving through country rife with bandits and roving Seanchan. The Forsaken are ever more present, and united, and the man called Slayer stalks Tel'aran'rhiod and the wolfdream.

In Ebou Dar, the Seanchan princess known as Daughter of the Nine Moons arrives--and Mat, who had been recuperating in the Tarasin Palace, is introduced to her. Will the marriage that has been foretold come about?

By Robert Jordan and Amy Romanczuk
Patterns of the Wheel: Coloring Art Based on Robert Jordan's The Wheel of Time

Robert Jordan's "The Wheel of Time" sequence is one of the more ambitious current fantasy epics; its ninth volume Winter's Heart advances a conclusion by fundamentally changing the rules of its war between overwhelming evil and deeply crippled good. Rand Al-Thor, in some sense a doomed hero born again, continues to travel the world seeking allies--as before, he finds himself caught up disastrously in the local politics of small city states and has to sort them out at some cost to himself. His fellow villagers--now the paladins of his crusade--deal with their own local problems; the agents of evil are abroad everywhere and have started to take this coterie of magically gifted youths seriously as a threat to their power and the return of their Dark master. The well-intentioned but over-reaching Aes Sedai nuns have started at last to deal with the infiltrators in their midst, and the invading Seanchan start to pursue goals beyond their strange cultural games of dominance and submission. And now Rand finally does something drastic--he attempts to cleanse male magic of the taint of madness that has crippled his world. Jordan's many fans will be enthralled by this latest volume. -- Roz Kaveney

Praise for Robert Jordan and The Wheel of Time(R)

"Anyone who's writing epic of secondary world fantasy knows Robert Jordan isn't just a part of the landscape, he's a monolith within the landscape." --Patrick Rothfuss, author of the Kingkiller Chronicle series

"The Eye of the World was a turning point in my life. I read, I enjoyed. (Then continued on to write my larger fantasy novels.)" --Robin Hobb, author of the award-winning Realm of the Elderlings series

"Robert Jordan's work has been a formative influence and an inspiration for a generation of fantasy writers." --Brent Weeks, New York Times bestselling author of The Way of Shadows

"Jordan's writing is so amazing! The characterization, the attention to detail!" --Clint McElroy, co-creator of the #1 podcast The Adventure Zone

"[Robert Jordan's] impact on the place of fantasy in the culture is colossal... He brought innumerable readers to fantasy. He became the New York Times bestseller list face of fantasy." --Guy Gavriel Kay, author of A Brightness Long Ago

"Robert Jordan was a giant of fiction whose words helped a whole generation of fantasy writers, including myself, find our true voices. I thanked him then, but I didn't thank him enough." --Peter V. Brett, internationally bestselling author of The Demon Cycle series

"I don't know anybody who's been as formative in crafting me as a writer as [Robert Jordan], and for that I will be forever grateful." --Tochi Onyebuchi, author of Riot Baby and War Girls

"I've mostly never been involved in any particular fandom, the one exception of course was The Wheel of Time." --Marie Brennan, author of the Memoirs of Lady Trent series

"I owe Robert Jordan so much. Without him, modern fantasy would be bereft of the expansive, deep worlds and the giant casts which I love so dearly. It's not often I can look at another author and say: that person paved my way. But such is exactly the case with Jordan." --Jenn Lyons, author of The Ruin of Kings

"You can't talk about epic fantasy without acknowledging the titanic influence Robert Jordan has had on the grenre." --Jason Denzel, author of Mystic and founder of Dragonmount.com

"Jordan has come to dominate the world Tolkien began to reveal." --The New York Times

"The Wheel of Time [is] rapidly becoming the definitive American fantasy saga. It is a fantasy tale seldom equaled and still less often surpassed in English." --Chicago Sun-Times

"Hard to put down for even a moment. A fittingly epic conclusion to a fantasy series that many consider one of the best of all time." --San Francisco Book Review

"The most ambitious American fantasy saga [may] also be the finest. Rich in detail and his plot is rich in incident. Impressive work, and highly recommended." --Booklist

"Jordan has come to dominate the world that Tolkien began to reveal." --The New York Times

"Jordan is able to take ... familiar elements and make them his own, in a powerful novel of wide and complex scope. Open religious and political conflicts add a gritty realism, while the cities and courts provide plenty of drama and splendor. Women have a stronger role than in Tolkien.... Each character in this large cast remains distinct.... Their adventures are varied, and exciting.... The Eye of the World stands alone as a fantasy epic." --Locus

"Robert Jordan has created a fantasy world as tangible and credible as history. He has a fine eye for detail and a vivid sense of drama." --Morgan Llewelyn

"Robert Jordan's The Eye of the World proves that there's still plenty of life in the ancient tradition of epic fantasy. Jordan has a powerful vision of good and evil-- but what strikes me as most pleasurable about The Eye of the World is all the fascinating people moving through a rich and interesting world." --Orson Scott Card

"Jordan's world is rich in detail and his plot is rich in incident. Impressive work, and highly recommended." --ALA Booklist