Items related to No LOGO: No Space, No Choice, No Jobs

Klein, Naomi No LOGO: No Space, No Choice, No Jobs

No LOGO: No Space, No Choice, No Jobs 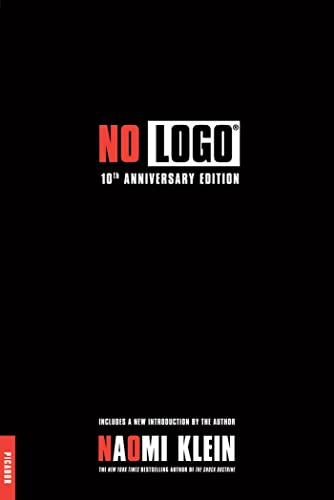 NO LOGO was an international bestseller and "a movement bible" (The New York Times). Naomi Klein's second book, The Shock Doctrine, was hailed as a "master narrative of our time," and has over a million copies in print worldwide.

In the last decade, No Logo has become an international phenomenon and a cultural manifesto for the critics of unfettered capitalism worldwide. As America faces a second economic depression, Klein's analysis of our corporate and branded world is as timely and powerful as ever.

Equal parts cultural analysis, political manifesto, mall-rat memoir, and journalistic exposé, No Logo is the first book to put the new resistance into pop-historical and clear economic perspective. Naomi Klein tells a story of rebellion and self-determination in the face of our new branded world.

We live in an era where image is nearly everything, where the proliferation of brand-name culture has created, to take one hyperbolic example from Naomi Klein's No Logo, "walking, talking, life-sized Tommy [Hilfiger] dolls, mummified in fully branded Tommy worlds". Brand identities are even flourishing online, she notes--and for some retailers, perhaps best of all online: "Liberated from the real-world burdens of stores and product manufacturing, these brands are free to soar, less as the disseminators of goods or services than as collective hallucinations."

In No Logo, Klein patiently demonstrates, step by step, how brands have become ubiquitous, not just in media and on the street but increasingly in the schools as well. The global companies claim to support diversity but their version of "corporate multiculturalism" is merely intended to create more buying options for consumers. When Klein talks about how easy it is for retailers like Wal-Mart and Blockbuster to "censor" the contents of videotapes and albums, she also considers the role corporate conglomeration plays in the process. How much would one expect Paramount Pictures, for example, to protest against Blockbuster's policies, given that they're both divisions of Viacom?

Klein also looks at the workers who keep these companies running, most of whom never share in any of the great rewards. The president of Borders, when asked whether the bookstore chain could pay its clerks a "living wage" wrote that "while the concept is romantically appealing, it ignores the practicalities and realities of our business environment." Those clerks should probably just be grateful they're not stuck in an Asian sweatshop, making pennies an hour to produce Nike sneakers or other must-have fashion items. Klein also discusses at some length the tactic of hiring "permatemps" who can do most of the work and receive few, if any, benefits like health care, paid vacations or stock options. While many workers are glad to be part of the "Free Agent Nation" observers note that, particularly in the high-tech industry, such policies make it increasingly difficult to organise workers and advocate for change.

But resistance is growing and the backlash against the brands has set in. Street-level education programmes have taught kids in the inner cities, for example, not only about Nike's abusive labour practices but about the astronomical mark-up in their prices. Boycotts have commenced: as one urban teen put it, "Nike, we made you. We can break you." But there's more to the revolution, as Klein optimistically recounts: "Ethical shareholders, culture jammers, street reclaimers, McUnion organisers, human-rights hacktivists, school-logo fighters and Internet corporate watchdogs are at the early stages of demanding a citizen-centred alternative to the international rule of the brands ... as global, and as capable of co-ordinated action, as the multinational corporations it seeks to subvert." No Logo is a comprehensive account of what the global economy has wrought and the actions taking place to thwart it. --Ron Hogan

"No Logo has been a pedagogical godsend. I used it to illustrate contemporary applications of complex cultural theories in an introductory social science sequence. It worked so beautifully, word about the book spread across campus, and other students were begging to read it in their sections of the course." --Bruce Novak, Division of Social Sciences, The University of Chicago

"A complete, user-friendly handbook on the negative effects that 1990s überbrand marketing has had on culture, work, and consumer choice." --The Village Voice

"The Das Kapital of the growing anti-corporate movement." --The London Observer

"Klein is a sharp cultural critic and a flawless storyteller. Her analysis is thorough and thoroughly engaging." --Newsweek.com

"No Logo is an attractive sprawl of a book describing a vast confederacy of activist groups with a common interest in reining in the power of lawyering, marketing, and advertising to manipulate our desires." --The Boston Globe

No Logo: 10th Anniversary Edition with a New Introduction by the Author Paperback