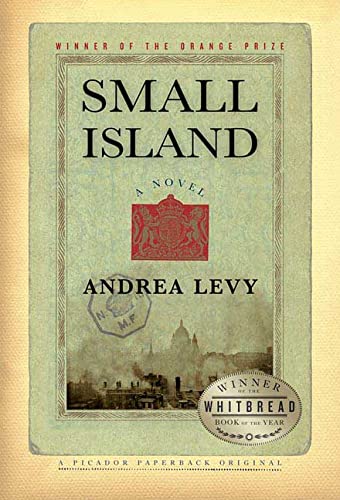 A novel of the immigrant experience brings together the lives of four very different people--Hortense Joseph, a recent arrival in London from Jamaica; her husband Gilbert, a war veteran who finds himself as a black man in Britain to be a second-class citizen; Queenie, Gilbert's white landlady; and her husband, Bernard, a fellow veteran of World War II. Winner of the 2004 Orange Prize for Fiction. Original. 25,000 first printing.

Every scene is rich in implication, entrancing and disturbing at the same time; the literary equivalent of a switch-back ride (The Sunday Times)

What makes Levy's writing so appealing is her even-handedness. All her characters can be weak, hopeless, brave, good, bad - whatever their colour. The writing is rigorous and the bittersweet ending, with its unexpected twist, touching... People can retain great dignity, however small their island (Independent on Sunday)

'Small Island is as full of warmth and jokes and humanity as you could wish...Such a rich saga, stuffed full of interlocking narratives' Time Out, 2 February 2004 (Time Out)

'An involving saga about the changing face of Britain' Mirror, 6 February 2004 (Mirror)

'I know it is a fiction, but I emerged from the book full of admiration for the patience and resilience of that generation...Levy has written one of those rare fictions that tells you things you didn't know but feel you should have known...the writing is deft and striking, without being pretentious' Sunday Herald, 8/2/04 (Sunday Herald)

'It is a work of great imaginative power which ranks alongside Sam Selvon's THE LONELY LONDONERS, George Lamming's THE EMIGRANTS and Caryl Phillips' THE FINAL PASSAGE in dealing with the experience of migration' Linton Kwesi Johnson (Linton Kwesi Johnson)

'What makes Levy's writing so appealing is her even-handedness. All her characters can be weak, hopeless, brave, good, bad - whatever their colour. The writing is rigorous and the bittersweet ending, with its unexpected twist, touching... People can retain great dignity, however small their island' Independent on Sunday, 25/1/04 (Independent on Sunday)

'A bevy of luminaries have garlanded Andrea Levy's fourth novel with advance praise - and it's no surprise. Using elements of her own family background, Levy has vividly animated London in the immediate aftermath of World War II... She weaves a wonderfully detailed and vibrant story' Red magazine, February 2004 issue (Red magazine, February 2004 issue)

'Gives us a new urgent take on our past' (Vogue)

'A cracking good read...I think what appealed to me most was the passion and anger in the writing all the way through, yet it was always leavened with a particularly wry sort of humour - the sort that, tho' you find yourself smiling, you at the same time realise you almost shouldn't be' Margaret Forster (Margaret Forster)

'I enjoyed SMALL ISLAND enormously and wish it every success. It conjures up so vividly the era of the 1940's and expresses so vividly through the lives of its four protagonists the conflicts and racist attitudes that existed at that time. A wonderful insight into a little understood period' Joan Bakewell (Joan Bakewell)

'A worthy winner of the 2004 Orange Prize for Fiction...Levy does not set out to preach, and her light touch, wry humour and down-to-earth, almost gossipy tone make this novel as readable as it is challenging' The Sunday Times, 19/9/04 (The Sunday Times)

'Small Island is a brilliant picture of the dented dreams of Jamaicans in post-war Britain' Financial Times, Dec 04 (Financial Times)

'Levy offers her readers rich satisfaction from both story and character' The Times, 10/7/04 (The Times)

'Levy's trinity of voices gently refutes the idea that the story of West Indian immigration has anything to do with (free) teeth or glasses' Guardian, 9/10/04 (Guardian)

'The small islands of Andrea Levy's title are not Britain, Jamaica or the outlying Caribbean islands - they are the blinkered mindsets of both the hopelessly optimistic West Indians and the reflexively racist Britons who have to learn to live together both during and after the war. But Levy's concern is not to browbeat but to educate and entertain. This deserving winner of the Orange Prize never loses its wit, energy or power' Observer, 30/10/04 (Observer)

'It's more than a novel, it's a recreation of a largely unexplored episode of our history...the narrative voices seem so authentic that it is easy to become lost in their sometimes dark, sometimes joyous worlds' Daily Express, 15/10/04 (Daily Express)

'Levy handles themes of empire, prejudice, war and love with a lightness of touch and an uplifting generosity of spirit' Age, Melbourne (Age, Melbourne)

'Levy tactfully delves into her family history while tackling the heavy issues of prejudice, assimilation and love in the ordinary lives of Jamaican migrants' MX, Melbourne, 31/5/04 (MX, Melbourne)

'Levy's book brings freshness and humour as well as indignation and pity to its survey of social and racial prejudice half a century ago' The Sunday Times, 28/11/04 (The Sunday Times)

'A spellbinding story... An enthralling tour de force that animates a chapter in the history of empire' Kirkus Reviews (Kirkus Reviews)

'What a deserved winner she is. It was a very good shortlist but in my opinion Small Island stood out at the longlist stage - for its writing, its wit and the impressively light touch she brought to the subject' Minette Walters, 15/6/04 (Minette Walters)

'Small Island operates on a larger canvas than Levy's previous novels. It's neither splashy nor experimental, but for thoughtfulness & wry humour cannot be faulted' Telegraph 21/2/04 (Telegraph)

'Small Island is a great read, delivering the sort of pleasure which has been the traditional stock-in-trade of a long line of English novelists. It's honest, skilful, thoughtful and important. This is Andrea Levy's big book' Guardian 14/2/04 (Guardian)

'Every scene is rich in implication, entrancing and disturbing at the same time; the literary equivalent of a switch-back ride' The Sunday Times, 29/2/04 (The Sunday Times)

'Here is the book I have been waiting for... an ample, sprawling story of nearly 450 pages, mirroring an expansive inner and outer landscape, spanning two islands and three continents, and incorporating a hybrid cast of humanly idiosyncratic characters; and above all, a book in which the author, Andrea Levy, never once forgets she is telling a story, delighting us, improbably, in this nasty tale of race, with the effervescent style of Dickens' Globe & Mail, Toronto, 12/6/04 (Globe & Mail, Toronto)

'Very ambitious and beautifully written... in addition [it's] funny and fiercely satirical' Richard Eyre in the Guardian, 16/6/05 (Guardian)

'Funny, poignant and profoundly moving...Small Island deals with the weighty themes of empire, prejudice, love and war with such humour and compassion that Levy has been praised for her even-handedness by some, condemned for it by others' West Australian, 1/5/04 (West Australian)

'Levy's story is a triumph in perspective...a triumph of poise, organisation and deep, deep character - the sort of work that can only be achieved by an experienced novelist' Age, Melbourne 17/4/04 (Age, Melbourne)

'Everything about the plot, characters and clever end twist of SMALL ISLAND [is] beautifully drawn... This is an epic book that brings the patois of Jamaicans alive, fills the world of war-torn London with amazing detail and is a great history lesson about the era when England changed forever as migrants braved bitter racism to flood her shores' Herald Sun (Melbourne), 10/4/04 (Herald Sun (Melbourne))