Items related to Hide-And-Seek with Angels: A Life of J. M. Barrie

Hide-And-Seek with Angels: A Life of J. M. Barrie 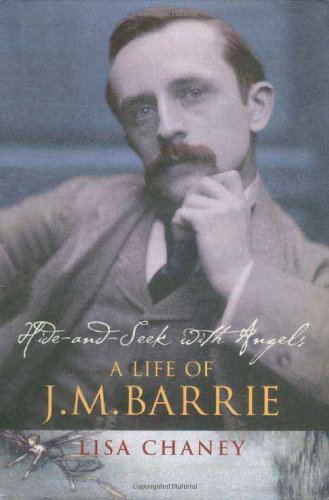 What kind of man creates a boy who never grows up? More than 100 years after Peter Pan first appeared on the London stage, author J. M. Barrie remains one of the most complex and enigmatic figures in modern literature. A few facts, of course, are widely known: Peter Pan made Barrie the richest author of his time, and he bequeathed the royalties to the Great Ormond Street Hospital for Sick Children. He was married, but later divorced, and he was devoted to the orphaned sons of Sylvia Llewelyn Davies, one of whom was named Peter. And then the rumors begin—about the nature of his marriage; about his precise relationship with the Davies boys, whose guardian he became; about the fantasies and demons that determined his achievements.

In this brilliant biography, Lisa Chaney goes beyond the myths to discover the fascinating, frequently misunderstood man behind the famous boy. James Matthew Barrie was born in a village in Scotland in 1860, the ninth of 10 children of a linen-weaver and his wife. When James was six years old, his older brother died in a skating accident, and his mother began her withdrawal into grief. It is not an exaggeration to say that Barrie’s entire life—both his professional triumphs as a writer and his personal tragedies—led up to the creation of Peter Pan, the play where “all children except one grow up.” As Lisa Chaney explores Barrie’s own struggles to grow up, she deepens our understanding both of his most famous character and of the complex relationship between life and art.

"I have been longing for a book to get to grips with Barrie's unquiet genius, and this is it. Hide-and-Seek with Angels has the richness, sympathy and depth of a great novel... Splendidly lucid. The archetypal Lost Boy has been found at long last" (Roger Lewis Sunday Express)

"[A] wonderful new biography... [Chaney] places Barrie very much in his time, and is always good on his relations with other writers, and with the contemporary world of journalism and theatre... This excellent biography... Fascinating insights and answers" (A.N. Wilson Evening Standard)

"Lisa Chaney, in her excellent new biography, gives Barrie credit for an intelligence and subtlety others have not noticed. He was a phenomenon, and lived a phenomenal life, coming from an impoverished Scottish home to become world-famous, hugely rich and uninhibitedly productive... Chaney is very good on Barrie's writing in general" (A.S. Byatt New Statesman)

"Absorbing... Chaney achieves two essential aims of such a biography - throwing intelligent... light on Barrie's complex character and demonstrating its effect on his output... She comes into her own when describing his dealings with his wilful mother... She makes a powerful plea for the imaginative writer over the psychologist as 'the natural historian of love'. In the process, she forces us to take Peter Pan seriously" (Sunday Times)

A fascinating and brilliantly revealing biography of the man who created Peter Pan.

6. HIDE-AND-SEEK WITH ANGELS: A LIF