Items related to Harold MacMillan: Aspects of a Political Life 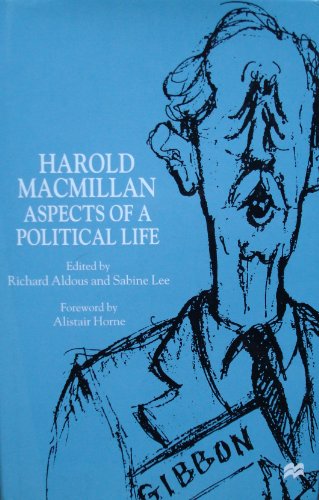 Biographers, historians, and contemporaries examine key features of the political life of MacMillan, who resigned as British Prime Minister in 1963. They look at his political visions, skills, and successes and failures in his personal life as well as his domestic and foreign policies. The 15 papers, from a September 1996 conference at Cambridge, take advantage of the recent release of official papers dealing with his career. Annotation c. Book News, Inc., Portland, OR (booknews.com)

'Scholars of the Macmillan years will none the less find a great deal to interest them in this book. If the present view of Macmillan remains, as the editors suggest, that he was 'all style and no substance', there is much here that will serve as a corrective.' - D.J. Dutton, Contemporary British Politcs

RICHARD ALDOUS is a college lecturer in Modern History at University College, Dublin. He edited Harold Macmillan and Britain's World Role (1996) and is writing a biography of Sir Malcolm Sargent.

SABINE LEE is lecturer in German History at the University of Birmingham. Her publications include An Uneasy Partnership British-German Relations between 1955 and 1961 (1996) and Harold Macmillan and Britain's World Role (with Richard Aldous) (1996). She is currently working on a biography of Sir Rudolf Peierls.

Book Description Palgrave Macmillan, 1999. Condition: Good. Former Library book. Shows some signs of wear, and may have some markings on the inside. Seller Inventory # GRP108833413

Book Description Palgrave Macmillan, 1999. Hardcover. Condition: Good. Connecting readers with great books since 1972. Used books may not include companion materials, some shelf wear, may contain highlighting/notes, may not include cdrom or access codes. Customer service is our top priority!. Seller Inventory # S_275786556

Book Description Palgrave Macmillan, 1999. Condition: Good. A+ Customer service! Satisfaction Guaranteed! Book is in Used-Good condition. Pages and cover are clean and intact. Used items may not include supplementary materials such as CDs or access codes. May show signs of minor shelf wear and contain limited notes and highlighting. Seller Inventory # 0312219067-2-4