Items related to No Logo: Taking Aim at the Brand Bullies

Klein, Naomi. No Logo: Taking Aim at the Brand Bullies 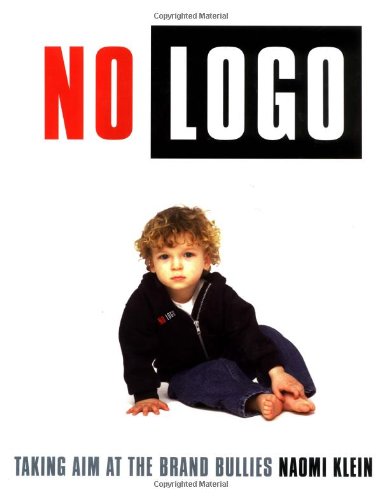 With a new Afterword to the 2002 edition. "No Logo "employs journalistic savvy and personal testament to detail the insidious practices and far-reaching effects of corporate marketing--and the powerful potential of a growing activist sect that will surely alter the course of the 21st century. First published before the World Trade Organization protests in Seattle, this is an infuriating, inspiring, and altogether pioneering work of cultural criticism that investigates money, marketing, and the anti-corporate movement. As global corporations compete for the hearts and wallets of consumers who not only buy their products but willingly advertise them from head to toe--witness today's schoolbooks, superstores, sporting arenas, and brand-name synergy--a new generation has begun to battle consumerism with its own best weapons. In this provocative, well-written study, a front-line report on that battle, we learn how the Nike swoosh has changed from an athletic status-symbol to a metaphor for sweatshop labor, how teenaged McDonald's workers are risking their jobs to join the Teamsters, and how "culture jammers" utilize spray paint, computer-hacking acumen, and anti-propagandist wordplay to undercut the slogans and meanings of billboard ads (as in "Joe Chemo" for "Joe Camel"). "No Logo "will challenge and enlighten students of sociology, economics, popular culture, international affairs, and marketing."This book is not another account of the power of the select group of corporate Goliaths that have gathered to form our de facto global government. Rather, it is an attempt to analyze and document the forces opposing corporate rule, and to lay out the particular set of cultural and economicconditions that made the emergence of that opposition inevitable."--Naomi Klein, from her Introduction

We live in an era where image is nearly everything, where the proliferation of brand-name culture has created, to take one hyperbolic example from Naomi Klein's No Logo, "walking, talking, life-sized Tommy [Hilfiger] dolls, mummified in fully branded Tommy worlds". Brand identities are even flourishing online, she notes--and for some retailers, perhaps best of all online: "Liberated from the real-world burdens of stores and product manufacturing, these brands are free to soar, less as the disseminators of goods or services than as collective hallucinations."

In No Logo, Klein patiently demonstrates, step by step, how brands have become ubiquitous, not just in media and on the street but increasingly in the schools as well. The global companies claim to support diversity but their version of "corporate multiculturalism" is merely intended to create more buying options for consumers. When Klein talks about how easy it is for retailers like Wal-Mart and Blockbuster to "censor" the contents of videotapes and albums, she also considers the role corporate conglomeration plays in the process. How much would one expect Paramount Pictures, for example, to protest against Blockbuster's policies, given that they're both divisions of Viacom?

Klein also looks at the workers who keep these companies running, most of whom never share in any of the great rewards. The president of Borders, when asked whether the bookstore chain could pay its clerks a "living wage" wrote that "while the concept is romantically appealing, it ignores the practicalities and realities of our business environment." Those clerks should probably just be grateful they're not stuck in an Asian sweatshop, making pennies an hour to produce Nike sneakers or other must-have fashion items. Klein also discusses at some length the tactic of hiring "permatemps" who can do most of the work and receive few, if any, benefits like health care, paid vacations or stock options. While many workers are glad to be part of the "Free Agent Nation" observers note that, particularly in the high-tech industry, such policies make it increasingly difficult to organise workers and advocate for change.

But resistance is growing and the backlash against the brands has set in. Street-level education programmes have taught kids in the inner cities, for example, not only about Nike's abusive labour practices but about the astronomical mark-up in their prices. Boycotts have commenced: as one urban teen put it, "Nike, we made you. We can break you." But there's more to the revolution, as Klein optimistically recounts: "Ethical shareholders, culture jammers, street reclaimers, McUnion organisers, human-rights hacktivists, school-logo fighters and Internet corporate watchdogs are at the early stages of demanding a citizen-centred alternative to the international rule of the brands ... as global, and as capable of co-ordinated action, as the multinational corporations it seeks to subvert." No Logo is a comprehensive account of what the global economy has wrought and the actions taking place to thwart it. --Ron Hogan

‘Just when you thought multi-nationals and crazed consumerism were too big to fight, along comes Naomi Klein with facts, spirit, and news of successful fighters already out there. No Logo is an invigorating call to arms for everybody who wants to save money, justice, or the universe.’
Gloria Steinem

‘What corporations fear most are consumers who ask questions. Naomi Klein offers us the arguments with which to take on the superbrands.’
Billy Bragg

NO LOGO: TAKING AIM AT THE BRAND