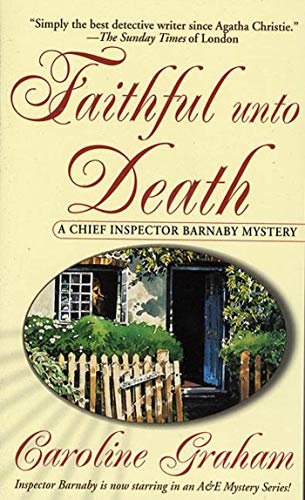 When Simone Hollingsworth fails to turn up at bell ringing practice, her fellow Fawcett Green villagers are neither surprised nor concerned. Unfailingly pleasant, extremely beautiful, and really rather dull, Simone has made her mark only as someone who has volunteered for too many activities in the community and stuck with none. It is only the Hollingsworths' neighbors, the vigilant Brockleys, who suspect the worst. They have noticed Simone's husband, Alan, behaving very strangely: slamming doors, burying boxes in the sun-baked garden, and keeping the curtains drawn to all. But even the Brockleys cannot suspect the true reason behind Simone's disappearance.

"Barnaby applies his logical mind to the many false clues in this cunning case, but it takes all his acquired insights into human psychology to distinguish the killer from all the other cuckoo characters who live and thrive in the mad, mad world of Fawcett Green." --The New York Times Book Review

"Simply the best detective writer since Agatha Christie." --The Sunday Times of London

In this compulsive fifth mystery of the series on which Midsomer Murders is based, Inspector Barnaby must unravel the truth about a marriage

Book Description Hardback. Condition: New. Us ed. Language: English. Brand new Book. When bored young housewife Simone Hollingsworth misses bell-ringing practice-her latest effort to find something to do-no one is surprised. In fact, if old Mrs. Molfrey, her neighbor, didn't report it to Detective Chief Inspector Barnaby, Simone's disappearance might have gone unrecorded in Fawcett Green. But ever Barnaby isn't concerned-until a body is found. Soon Barnaby is uncovering the passionate entanglements beneath the placid surface of Fawcett Green-and perhaps jeopardizing his career. Now, if he misconstrues the clue buried in Simone's garden-and a subtlety of human behavior his experienced eye should spot-a brutal killer may go free. Seller Inventory # APC9780312185770