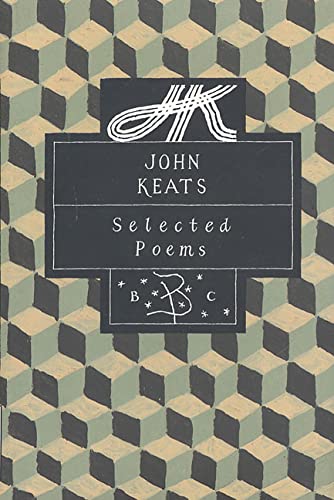 When old age shall this generation waste,
Thou shalt remain, in the midst of other woe
Than ours, a friend to man to whom thou say'st
"Beauty is truth, truth beauty"-that is all
Ye know on earth, and all ye need to know.

Bloomsbury Poetry Classics are selections from the work of some of our greatest poets. The series is aimed at the general reader rather than the specialist and carries no critical or explanatory apparatus. This can be found elsewhere. In the series the poems introduce themselves, on an uncluttered page and in a format that is both attractive and convenient. The selections have been made by the distinguished poet, critic, and biographer Ian Hamilton.

John Keats was born in 1795, the son of a livery-stable keeper. An orphan by the age of fourteen, he was apprenticed to a surgeon for a time, but gave up medicine for poetry. His luxuriant early work was famously savaged by the critics, but he remained assured in his conviction that he would eventually "be among the English poets," and his volume of 1820 was more favorably viewed. Keats's longed-for marriage to Fanny Brawne was prevented by the onset of the tuberculosis that killed him, at the age of twenty-six, in 1821.

Book Description Condition: Good. Hardcover with dust jacket. Good solid paperback with moderate reading/age wear, may have some light markings, pages may have some mild tanning. We take great pride in accurately describing the condition of our books and media, ship within 48 hours, and offer a 100% money back guarantee. Customers purchasing more than one item from us may be entitled to a shipping discount. Seller Inventory # 1M5000005MU0_ns

Book Description Paperback. Condition: Very Good. The book has been read, but is in excellent condition. Pages are intact and not marred by notes or highlighting. The spine remains undamaged. Seller Inventory # GOR009769287