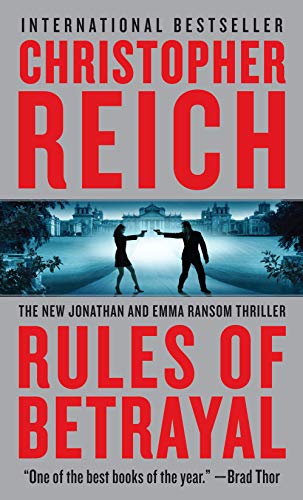 PRAISE FOR "RULES OF BETRAYAL" "When I want a fantastic read, I reach for a Christopher Reich thriller. Loaded with heart-pounding action, page-turning suspense, and unforgettable characters, "Rules of Betrayal" is one of the best books of the year. Christopher Reich is the king of international intrigue and "Rules of Betrayal" is Reich on the money!" --Brad Thor, #1 "New York Times" bestselling author of "Foreign Influence" PRAISE FOR CHRISTOPHER REICH FROM SOME OF HIS FAMOUS FANS "Christopher Reich is at the top of his game." --David Baldacci "Christopher Reich is one of my favorite suspense writers." --James Patterson "Christopher Reich is the master of the espionage thriller for the 21st century." --Clive Cussler "Reich concocts an elaborate, appealingly twisty plot." --"Entertainment Weekly ""This series is taking off like a rocket." --Lee Child "From the Hardcover edition." an entire novel." --"Newsdayx