Items related to The Buddha in the Attic

Otsuka, J The Buddha in the Attic 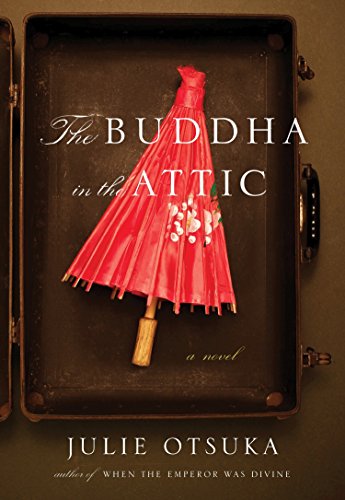 Finalist for the 2011 National Book Award

Julie Otsuka's long awaited follow-up to When the Emperor Was Divine ("To watch Emperor catching on with teachers and students in vast numbers is to grasp what must have happened at the outset for novels like Lord of the Flies and To Kill a Mockingbird" --The New York Times) is a tour de force of economy and precision, a novel that tells the story of a group of young women brought over from Japan to San Francisco as 'picture brides' nearly a century ago. In eight incantatory sections, The Buddha in the Attic traces their extraordinary lives, from their arduous journey by boat, where they exchange photographs of their husbands, imagining uncertain futures in an unknown land; to their arrival in San Francisco and their tremulous first nights as new wives; to their backbreaking work picking fruit in the fields and scrubbing the floors of white women; to their struggles to master a new language and a new culture; to their experiences in childbirth, and then as mothers, raising children who will ultimately reject their heritage and their history; to the deracinating arrival of war. In language that has the force and the fury of poetry, Julie Otsuka has written a singularly spellbinding novel about the American dream.

Finalist for the 2011 National Book Award in Fiction

Winner of the 2012 PEN/Faulkner Award in Fiction

Acclaim for Julie Otsuka's The Buddha in the Attic "Poetic . . . Otsuka combines the tragic power of a Greek chorus with the intimacy of a confession. She conjures up the lost voices of a generation of Japanese American women without losing sight of the distinct experience of each. . . . An understated masterpiece . . . The distillation of a national tragedy that unfolds with great emotional power . . . The Buddha in the Attic seems destined to endure. --Jane Ciabattari, San Francisco Chronicle "Otsuka's incantatory style pulls her prose close to poetry." --Alida Becker, The New York Times Book Review "A stunning feat of empathetic imagination and emotional compression, capturing the experience of thousands of women." --Megan O'Grady, Vogue "Spare and stunning . . . Otsuka has created a tableau as intricate as the pen stokes her humble immigrant girls learned to use in letters to loved ones they'd never see again." --Celia McGee, O, The Oprah Magazine "A lithe stunner." --Lisa Shea, Elle "Haunting and intimate . . . Otsuka extracts the grace and strength at the core of immigrant (and female) survival and, with exquisite care, makes us rethink the heartbreak of eternal hope." --Susanna Sonnenberg, More "Otsuka's book has become emblematic of the brides themselves: slender and serene on the outside, tough, weathered and full of secrets on the inside." --Jim Higgins, Milwaukee Journal Sentinel "Otsuka masterfully creates a chorus of unforgettable voices that echo throughout the chambers of this slim but commanding novel, speaking of a time that no American should ever forget." --Meganne Fabrega, Minneapolis StarTribune "The novel comprises a gorgeous mosaic of the hopes and dreams that propelled so many immigrants across an ocean to an unknown country. The author, Julie Otsuka, illuminates the challenges, suffering and occasional joy that they found in their new homeland. . . . A social history of the Japanese immigrant experience wrought in exquisite poetry, each sentence spare in words, precise in meaning and eloquently evocative, like a tanka poem, this book is a rare unique treat." --Alice Stephens, Washington Independent Book Review "An amazing, wonderful book that will surprise and delight you. . . . Otsuka keeps the language sparse yet evocative, her Hemmingway-like descriptions of scenery and events are lyric and transfixing. . . . Once you engage with this book, it won't let you leave it, not until you enjoy the last word in the last sentence." --Greg Langly, Baton Rouge Advocate. "A delicate, heartbreaking portrait . . . beautifully rendered . . . Otsuka's prose is precise and rich with imagery. Readers will be . . . hopelessly engaged and will finish this exceptional book profoundly moved." --Publishers Weekly (starred review) "An incantatory and haunting group portrait . . . Drawing on extensive research and profoundly identifying with her characters, Otsuka crafts an intricately detailed folding screen depicting nearly five decades of change as the women painstakingly build meaningful lives, only to lose everything after Pearl Harbor. This lyrically distilled and caustically ironic story of exile, effort, and hate is entrancing, appalling, and heartbreakingly beautiful." --Donna Seaman, Booklist (starred review) "A luminous second novel . . . Otsuka works an enchantment upon her readers . . . and leaves us haunted and astonished at the powers of her subtlety and charms. . . . Unforgettable." --Margaret Heilbrun, Library Journal (starred review) "A lovely prose poem that gives a bitter history lesson." --Kirkus Reviews "Daring . . . Mesmerizing . . . Otsuka has the moves of a cinematographer . . . A master of understatement and apt detail." --Laura Reynolds Adler, Bookpage "Julie Otsuka paints and sculpts elegant and vivid art with a pencil and words. . . . Succinct and stylish." --Tony Sauro, Stockton Record

"Daring as well as formally unique...spare, precise, and often pitch perfect." -Women's Review of Books One of Philadelphia Inquirer's 2011 Staff Favorites One of San Francisco Chronicle's Best of 2011--100 Recommended Books One of Chicago Tribune's top picks from 2011 One of Library Journal's Top Ten from 2011

Acclaim for Julie Otsuka's When the Emperor Was Divine "[A] crystalline debut novel. . . . [Otsuka has] lyric gifts and narrative poise, her heat-seeking eye for detail, her effortless ability to empathize with her characters. . . . [A] resonant and beautifully nuanced achievement." --Michiko Kakutani, The New York Times "Exceptional. . . . Otsuka skillfully dramatizes a world suddenly foreign. . . . [Her] incantatory, unsentimental prose is the book's greatest strength." --The New Yorker "Spare, incisive. . . . The mood of the novel tensely reflects the protagonists' emotional state: calm surfaces above, turmoil just beneath." --Amanda Heller, The Boston Globe "[A] gentle, understated novel. . . . A story that has more power than any other I have read about this time." --Susan Salter Reynolds, The Los Angeles Times "With her gift for compression and her feel for a child's-eye view of disrupted family life, Otsuka neatly sidesteps any checklist predictability as she covers her ground. . . . While you're reading this accomplished novel, what impresses you most is how much Otsuka is able to convey--in a line, in a paragraph--about her characters' surroundings, about their states of mind and about the mood of our country at a time of crisis." --Michael Upchurch, The New York Times Book Review "A beautiful little book. . . . Otsuka's writing is accomplished, absorbing and tight. Her spare prose is complemented by precise details, vivid characterization and a refusal to either flinch at or sentimentalize." --Kate Washington, San Francisco Chronicle "An exceptional short novel. . . . A story that is elegiac and representative. . . . When the Emperor Was Divine carves out its own special place in style and substance. The book is shaped like a parable: Short, unadorned sentences say less while signifying more. . . . Stunning economy. . . . An exceptional piece of fiction." --Ellen Emry Heltzel, The Chicago Tribune "Prose so cool and precise that it's impossible not to believe what [Otsuka] tells us or to see clearly what she wants us to see. . . . A gem of a book and one of the most vivid history lessons you'll ever learn." --Ann Stephenson, USA Today "With a matter-of-fact brilliance, and a poise as prominent in the protagonist as it is in the writing, When the Emperor Was Divine is a novel about loyalty, about identity, and about being other in America during uncertain times."
--Nathan Englander, author of The Ministry of Special Cases "Shockingly brilliant. . . . It will make you gasp. . . . Undoubtedly one of the most effective, memorable books to deal with the internment crisis. . . . The maturity of Otsuka's . . . prose is astonishing." --Terry Hong, The Bloomsbury Review "Potent, spare, crystalline--Julie Otsuka's new novel is an exquisite debut. The novel's voice is as hushed as a whisper."
--Francine Prose, O, The Oprah Magazine "A timely examination of mass hysteria in troubled times. . . .Otsuka combines interesting facts and tragic emotions with a steady, pragmatic hand." --The Oregonian "At once delicately poetic and unstintingly unsentimental."
--Mindi Dickstein, St. Petersburg Times "Her voice never falters, equally adept at capturing horrific necessity and accidental beauty. Her unsung prisoners of war contend with multiple front lines, and enemies who wear the faces of neighbors and friends. It only takes a few pages to join their cause, but by the time you finish this exceptional debut, you will recognize that their struggle has always been yours." --Colson Whitehead, author of John Henry Days "Heartbreaking. . . . A crystalline account."
--John Marshall, The Seattle Post-Intelligencer "Heartbreaking, bracingly unsentimental. . . .rais[es] the specter of wartime injustice in bone-chilling fashion. . . . The novel's honesty and matter-of-fact tone in the face of inconceivable injustice are the source of its power. . . . Dazzling." --Publishers Weekly (starred review) "Otsuka . . . demonstrates a breathtaking restraint and delicacy throughout this supple and devastating first novel. . . . [She] universalizes their experience of prejudice and disenfranchisement, creating a veritable poetics of stoicism." --Donna Seaman, Booklist (starred review) "Spare yet poignant. . . . clear, elegant prose." --Reba Leiding, Library Journal (starred review) About the Author:

Julie Otsuka was born and raised in California. She is the author of the novel, When the Emperor was Divine, and a recipient of the Asian American Literary Award, the American Library Association Alex Award, and a Guggenheim fellowship. She lives in New York City.