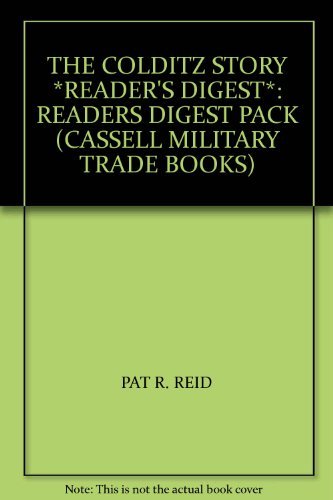 Colditz was the last stop for prisoners of war during WWII. Those who persisted in escaping from other camps were sent to the impregnable fortress of Colditz Castle, situated on a rocky outcrop high above the River Mulde. Once within the walls of the castle, the Germans reasoned, escape was impossible. And yet many prisoners attempted escape and many succeeded

Pat Reid was one of those men. Appointed 'Escape Officer' by his fellow inmates, he masterminded many of the attempts. From tunnelling, to hiding in rubbish sacks, disguising themselves as German officers and even leaping from the castle walls, nothing was too dangerous or foolhardy compared to imprisonment by the enemy. Reid's own escape, in 1942, was both one of the most simple and the most daring.

First published in 1952, The Colditz Story is a classic escape story in the tradition of The Great Escape and The Wooden Horse.

A true classic, this is the original, bestselling story of escape from the dreaded German P.O.W. camp.

Pat Reid was one of the first captives to be imprisoned at Colditz in the Second World War. The tale of how he escaped the prison is one of the classics of twentieth century literature.

Book Description Condition: Very Good. Shipped within 24 hours from our UK warehouse. Clean, undamaged book with no damage to pages and minimal wear to the cover. Spine still tight, in very good condition. Remember if you are not happy, you are covered by our 100% money back guarantee. Seller Inventory # 6545-9780304362394

Book Description Condition: Very Good. This book is in very good condition and will be shipped within 24 hours of ordering. The cover may have some limited signs of wear but the pages are clean, intact and the spine remains undamaged. This book has clearly been well maintained and looked after thus far. Money back guarantee if you are not satisfied. See all our books here, order more than 1 book and get discounted shipping. . Seller Inventory # 7719-9780304362394

Book Description Hardcover. Condition: Used; Good. **Simply Brit** Shipped with Premium postal service within 24 hours from the UK with impressive delivery time. We have dispatched from our book depository; items of good condition to over ten million satisfied customers worldwide. We are committed to providing you with reliable and efficient service at all times. Seller Inventory # 1093914

Book Description Hardcover. Condition: Used; Good. **SHIPPED FROM UK** We believe you will be completely satisfied with our quick and reliable service. All orders are dispatched as swiftly as possible! Buy with confidence!. Seller Inventory # 3530658

Book Description Paperback. Condition: Very Good. The book has been read, but is in excellent condition. Pages are intact and not marred by notes or highlighting. The spine remains undamaged. Seller Inventory # GOR002129234

Book Description Hardcover. Condition: Very Good. Item is in very good condition. If supplemental codes/CDs for textbooks are required please contact us prior to purchasing as they may be missing. Photos are stock pictures and not of the actual item. Seller Inventory # DS-0304362395-2