Items related to The Fall Of Crete (CASSELL MILITARY PAPERBACKS) 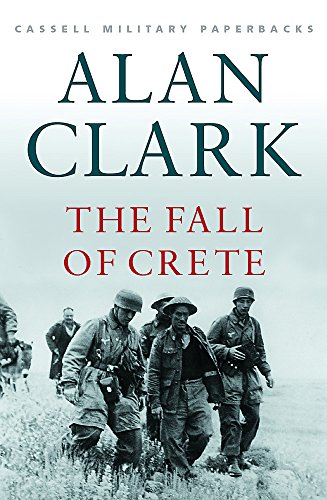 The epic story of one of the most bitter and dramatic battles fought between German and Allied forces during the whole of the Second World War. The decisive action took place within five days, and twice its outcome hung in the balance. By the third day, the number of German dead exceeded their losses in all other theatres since the outbreak of hostilities. The German parachutists were confined for supply and reinforcements to a single airstrip at Maleme, yet on this one foothold they managed to land over eight thousand men, who defeated an Allied army nearly five times as numerous. With its vivid and compelling description of the battle for Crete, Clark confirmed his reputation as a military historian first recognised with The Donkeys, his account of the British Expeditionary Force in France in 1914.

The classic history of the fall of Crete during the Second World War. The first major airborne assault in history.

Alan Clark made his reputation as a military historian with THE DONKEYS, an account of the First World War, and BARBAROSSA, a description of the 1941ż1945 Russo-German conflict. In 1993 his DIARIES were published to acclaim and have now sold in excess of 250,000 copies. He was MP for Kensington and Chelsea, and was a Minister in the governments of Margaret Thatcher and John Major.