Items related to When the Money Runs Out: The End of Western Affluence

King, Stephen When the Money Runs Out: The End of Western Affluence

When the Money Runs Out: The End of Western Affluence 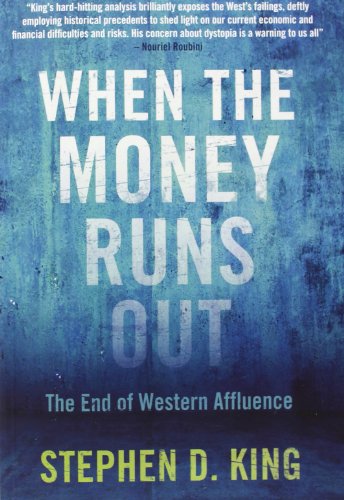 The Western world has experienced extraordinary economic progress throughout the last six decades, a prosperous period so extended that continuous economic growth has come to seem normal. But such an era of continuously rising living standards is an historical anomaly, economist Stephen D. King warns, and the current stagnation of Western economies threatens to reach crisis proportions in the not-so-distant future. Praised for the "dose of realism" he provided in his book Losing Control, King follows up in this volume with a plain-spoken assessment of where the West stands today. It's not just the end of an age of affluence, he shows. We have made promises to ourselves that are only achievable through ongoing economic expansion. The future benefits we expect - pensions, healthcare, and social security, for example - may be larger than tomorrow's resources. And if we reach that point, which promises will be broken and who will lose out? The lessons of history offer compelling evidence that political and social upheaval are often born of economic stagnation. King addresses these lessons with a multifaceted plan that involves painful - but necessary - steps toward a stable and just economic future.

'King writes with an authoritative and erudite voice, making him an excellent guide through the convolutions of the financial crisis.' --Iain Morris, The Observer, 26th May 2013

'His clear-eyed assessment of the problems ahead makes the book essential reading.' --The Economist, 9th May 2013

'Instead of believing that everything is once again on an upward trajectory - however slow - after the banking collapse, King argues that stagnation could well become the norm...King doesn't exactly prescribe a cure, other than that our expectations need lowering, but in assessing the problem he is admirably thorough.' --James Ashton, Evening Standard, 30th May 2013

'King is a tough-minded economist and his approach is analytical and brilliantly educational, though you might wish you hadn't learnt some of the stuff in these pages...There are too many entertaining but depressing examples to list here. Instead, I will focus on the book's greatest strength, which is its clear sense of the role of belief or, if you prefer, psychology in the working of the economy.' --Bryan Appleyard, New Statesman, 31st May 2013

'[King] wants to chill you with a tale of how western economies have lost their way...a polished performer, the tone is breezy and King ranges widely...[he] makes a great case for further decline in the West.' --Dominic O'Connell, Sunday Times, 2nd June 2013

'It is it alarmingly difficult to disagree with Stephen King. All one can say, perhaps, is that one of the great errors of human nature - strongly displayed before the credit crunch - is the belief that a prevailing trend will continue indefinitely. The crunch is surely a reminder that what goes up must come down'. --Charles Moore, Daily Telegraph, 24th June 2013.

'King argues...that the future is not what it used to be. We have made promises to ourselves we cannot afford to keep. [This] argument is important...' --Martin Wolf, Financial Times, 27th June 2013

Stephen D. King is Group Chief Economist and Global Head of Economics and Asset Allocation research at HSBC. He is a member of the UK government's Asia Task Force and writes regularly for the Financial Times and The Times. He lives in London.

1. When the Money Runs Out: The End of Western Affluence

2. When the Money Runs Out: The End of Western Affluence

3. When the Money Runs Out: The End of Western Affluence

Book Description Yale University Press, 2013. Paperback. Condition: Used; Good. **Simply Brit** Shipped with Premium postal service within 24 hours from the UK with impressive delivery time. We have dispatched from our book depository; items of good condition to over ten million satisfied customers worldwide. We are committed to providing you with reliable and efficient service at all times. Seller Inventory # 3073718

4. When the Money Runs Out: The End of Western Affluence

Book Description Yale University Press, 2013. Paperback. Condition: Used; Good. **SHIPPED FROM UK** We believe you will be completely satisfied with our quick and reliable service. All orders are dispatched as swiftly as possible! Buy with confidence!. Seller Inventory # 1831809

5. When the Money Runs Out: The End of Western Affluence

Book Description Yale University Press, 2013. Soft cover. Condition: Near Fine. Yale University Press, 2013. Softcover (16 x 23 cm), x, 287 pages. ISBN: 9780300197952. Near Fine condition. "After six decades of continuously rising living standards, economic growth in the West has come to an abrupt halt. As politicians and economists squabble over how to best rescue flagging economies, Stephen D. King, argues that there are no easy answers to the West's predicament, and explains why quick-fix solutions like quantitative easing have failed to deliver the desired results." Weight (before packaging): 490g. Seller Inventory # 2198

6. When the Money Runs Out: The End of Western Affluence

Book Description Yale University Press, 2013. Paperback. Condition: Very Good. The book has been read, but is in excellent condition. Pages are intact and not marred by notes or highlighting. The spine remains undamaged. Seller Inventory # GOR008096873

7. When the money runs out

8. When the Money Runs Out: The End of Western Affluence

Book Description Yale University Press, 2013. Condition: Good. A+ Customer service! Satisfaction Guaranteed! Book is in Used-Good condition. Pages and cover are clean and intact. Used items may not include supplementary materials such as CDs or access codes. May show signs of minor shelf wear and contain limited notes and highlighting. Seller Inventory # 0300197950-2-4