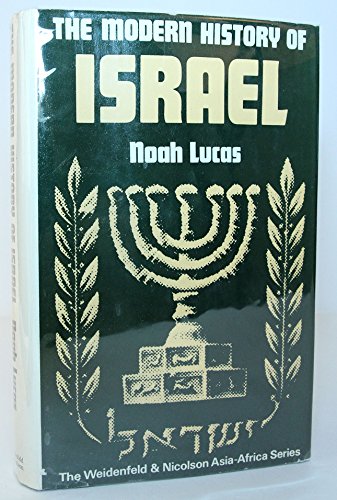 Modern History of Israel ([The Weidenfeld and Nicolson Asia-Africa series])

Book Description Hardcover. Condition: Good. Ex library copy with usual stamps/stickers Good condition is defined as: a copy that has been read but remains in clean condition. All of the pages are intact and the cover is intact and the spine may show signs of wear. The book may have minor markings which are not specifically mentioned. Most items will be dispatched the same or the next working day. Seller Inventory # wbb0017910825

The Modern History of Israel

Book Description Condition: Good. Ships from the UK. Former library book; may include library markings. Used book that is in clean, average condition without any missing pages. Seller Inventory # 40067175-20

The Modern History of Israel

Book Description Condition: Fair. This is an ex-library book and may have the usual library/used-book markings inside.This book has hardback covers. In fair condition, suitable as a study copy. Dust Jacket in good condition. Please note the Image in this listing is a stock photo and may not match the covers of the actual item,800grams, ISBN:0297768409. Seller Inventory # 8086467

Book Description Hardback. Condition: Very Good. The book has been read, but is in excellent condition. Pages are intact and not marred by notes or highlighting. The spine remains undamaged. Seller Inventory # GOR006554281

Book Description Hardcover. Condition: Very Good. 1975 Weidenfeld and Nicolson (London), 5 7/8 x 8 3/4 inches tall green cloth hardbound in publisher's unclipped dust jacket, gilt lettering to spine, [10], 500 pp. Bumping to tips of front board with resultant very slight crease to lower page tips. Slight rubbing to covers. Association copy: light, neat pencil marginalia on about a dozen pages in the Epilogue correcting or amending the author's observations, said notations made by the prior owner, Max Kreutzberger (1900-1978), noted Jewish historian and first executive director of the Leo Baeck Institute. Otherwise, a very good copy - clean, bright and unmarked - in a slighhtly edgeworn dust jacket, nicely preserved in a clear archival sleeve. ~SP19~ The author, Noah Lucas (1927-2008), an eminent and sometimes controversial scholar of modern Middle Eastern studies, was a fellow of the Oxford Centre for Hebrew and Jewish Studies and senior associate fellow of the Middle Eastern Centre of St Antony's College, Oxford. An active member of the Habonim movement, he was strongly influenced by his fervently Labour Zionist (Poale Zion) Ukrainian-born parents and by his maternal uncle, Nathan Morris, director of Jewish education in the UK in the 1940s. In 1951, when Noah had finished his MA at Glasgow University, he accompanied his family to Israel, settling in the Habonim kibbutz, Bet-Ha'emek, where many of the family still reside. He taught from 1962-66 in the Hebrew University's department of political science, and the next year at Glasgow University. From 1967 he taught at Sheffield University's department of politics until 1988. He was an advisor to the Labour Friends of Israel and sat on the parliamentary committee on the Middle East. He wrote for scholarly journals as well as most of the major UK and US newspapers on the changing face of Israeli politics. Seller Inventory # SP19-0151-2423

Book Description Hardcover. Condition: Good. No Jacket. Item is in good condition. Some moderate creases and wear. This item may not come with CDs or additional parts including access codes for textbooks. This may not have a dust jacket. Might be an ex-library copy and contain writing/highlighting. Photos are stock pictures and not of the actual item. Seller Inventory # DS-0297768409-3