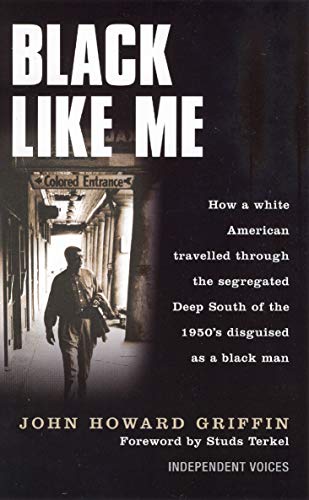 In October 1959, before the Civil Rights movement would spread across the United States, John Howard Griffin underwent medical treatments to disguise himself as a black man. He then travelled through the segregated Deep South of America, exchanging the privileged life of a white man for the disenfranchisement of the black man, and experienced the racism that was endured by millions on a daily basis. From the threat of violence to the simple indignities of being unable to use a drinking fountain or buy food from a particular shop Griffin documented the experience of racism and opened the eyes of white America to the abuses going on in their country. Black Like Me is required reading in schools and colleges in the United States but this is its first British publication in decades, reminding readers of the ever-present threats of racism and prejudice and demonstrating the difference that one man can make.

One of the most extraordinary books ever written about relations between the races. --'The Today Programme' (BBC Radio 4)

In 1959, a white American decided to turn himself into a Negro ... John Howard Griffin would venture alone into some of the Deep South s most virulently racist hotspots and experience life on the other side of the tracks... Black Like Me brilliantly reveals the dehumanisation of black people by the white majority... This reissued edition will introduce a whole new British readership to a work that is still an important, illuminating and fascinating read. --Bernardine Evaristo, 'The Times'

One of the most fascinating journalistic investigations carried out in the USA... When Griffin described what he experienced... it awoke a vast section of the American public to what was happening in their country. --'The Voice'

John Howard Griffin was a novelist and photographer. He served with the French Resistance during World War Two and after the publication of Black Like Me enduring threats and physical attacks. As a human rights activist he worked with Martin Luther King and taught at the University of Peace

Book Description Paperback. Condition: Good. The book has been read but remains in clean condition. All pages are intact and the cover is intact. Some minor wear to the spine. Seller Inventory # GOR004509522

Book Description Paperback. Condition: Very Good. In the autumn of 1959, a white Texan journalist named John Howard Griffin travelled across the Deep South of the United States disguised as a working class black man. Black Like Me is Griffin's own account of his journey. Published in book form two years later it revealed to a white audience the day-to-day experience of racism in segregation-era America. Selling over five million copies, Black Like Me became one of the best-known accounts of race and racism in the 1960s. Embraced by some and fiercely criticised by others, its legacy sixty years on remains problematic, but Black Like Me nevertheless stands as a fascinating document of its time. The book has been read, but is in excellent condition. Pages are intact and not marred by notes or highlighting. The spine remains undamaged. Seller Inventory # GOR003003906

Book Description Condition: Good. This is an ex-library book and may have the usual library/used-book markings inside.This book has soft covers. In good all round condition. Please note the Image in this listing is a stock photo and may not match the covers of the actual item,400grams, ISBN:9780285638570. Seller Inventory # 8537938