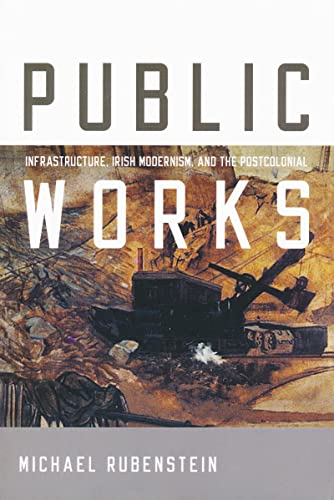 In analyses of literary works by James Joyce, Flann O'Brien, Elizabeth Bowen, Denis Johnston, Samuel Beckett, and Patrick Chamoiseau, Rubenstein asks us to think about the industrial networks of the twentieth century alongside self-consciously "national" literary works and to understand them as different but inherently related forms of public works. In doing so his book maps thematic and formal relationships between national infrastructure and national literature, revealing an intimate dialogue between the nation's literary arts and the state's engineering cultures.

"Michael Rubenstein's wonderfully clear, engaging, smart, and witty new book . . . deals primarily with the history, politics, and legacy of the Irish Free State by looking at large-scale municipal projects. . . . There is much to admire in this book: unique readings of canonical texts; fresh connections between painting, literature, engineering, politics, and economics; and . . . a keen sense of the key questions of our contemporary moment: namely, the usefulness and value of government."--James Joyce Literary Supplement

"Public Works: Infrastructure, Irish Modernism, and the Postcolonial offers an innovative take on the multiple functions of public utilities in literary discourses, with an emphasis on those that consider the effects of modernization in Ireland. Michael Rubenstein's approach brings to the fore the previously understudied subjects of water, gas, and electricity as agents in the development of the Irish Free State between 1922 and 1940."--New Hibernia Review

"Public Works is a refreshing addition to both modernist and postcolonial studies, and one that is almost certainly indicative of a new kind of scholarship in both fields. By taking the somewhat counterintuitive approach of linking works of engineering to works of literature, Rubenstein has produced a truly interdisciplinary study that provides valuable insights into some of Ireland's most important literary figures."--Modern Fiction Studies

"In terms of its imaginative research, its theoretical risk-taking, and its startlingly original views of Irish modernity, Michael Rubenstein deserves to be included on this short list of infrastructure must-reads."--Irish University Review

"Michael Rubenstein's Public Works asks us to look at a new dimension of a specifically Irish modernism when he argues for the vital importance of infrastructure, specifically electricity, water, and gas. Following the lead of Bruce Robbins, Michael Bérubé, and others, Rubenstein frames his argument within 'a Benjaminian, redemptionist, weak-messianic story about the development of public utilities as the development of a common good.' "--James Joyce Quarterly

"Public Works received the Modernist Studies Association Book Prize in 2011 and the Rhodes Prize for Best Book in Irish Literature from the American Conference for Irish Studies in 2010, and it will certainly influence subsequent work in both fields through its well-honed examination of the connections between public utilities and Irish modernism. Among its many accomplishments, Public Works provides new readings of well-tread modernist texts."--E3W Review of Books

"One of the most original and important contributions to Irish studies, and to a number of other fields as well, that has been written by a young scholar in recent years. It will be an important and much discussed book. It participates in, and outlines the future of, significant new directions in areas such as Irish studies, modernist studies, postcolonial studies, and the study of the relations among technology, materiality, and culture."--Marjorie Howes, Boston College

"Can you imagine a Joycean appeal for the payment of taxes? If you do not find it easy, you may be ready to take in the superb literary flair and pitch-perfect sense of present urgencies that puts Public Works at the sharpest edge of new scholarship. Michael Rubenstein makes a tiger's leap into the recent past, when the intimacy of the home had not yet learned to take for granted its connection to networks of electricity, gas, and water. He has written the book on the very hot topic of infrastructure, and he's done so while also figuring out a new direction for postcolonial studies. You will never be able to read Ulysses the same way again."--Bruce Robbins, Columbia University

". . . This brilliant book offers riches in abundance not only for scholars in Irish studies but for anyone concerned with literature and culture as they function in the world today. It is theoretically rigorous, intellectually wide-ranging, and never less than a pleasure to read."--Contemporary Literature

Michael Rubenstein is assistant professor of English at the University of California, Berkeley.