Cox, Maggie; Gold, Kristi The Man She Can't Forget / One Night With The Sheikh

The Man She Can't Forget / One Night With The Sheikh 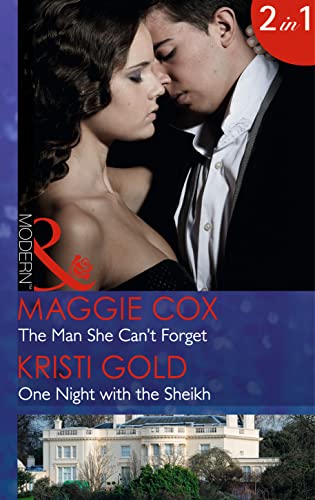 The Man She Can’t Forget
Once forbidden...

Gabriel Devenish swoops back into Lara Bradley’s life causing a whirlwind of emotion. The ruthless millionaire who stands before her is unrecognisable from the carefree object of her teenage desires.

Gabriel must show Lara just how wrong he is for her. But doing so only makes him realise how just right she makes him feel...threatening the very foundations of the wall he’s built around his heart.

One Night with the Sheikh
‘I have never forgotten that night.’

Once, he’d chosen duty over love. Now, widower Sheikh Rafiq Mehdi seeks an escape in the arms of old flame Dr Maysa Barad. She’s the woman he should have married – beautiful, devoted, compassionate – but she’s now too independent to be a sheikh’s bride. Rafiq may be ready to defy his kingdom to have her, but is he prepared to face the truth about Maysa?

The day Maggie Cox saw the film version of Wuthering Heights, was the day she became hooked on romance. From that day onwards she spent a lot of time dreaming up her own romances,hoping that one day she might become published. Now that her dream is being realised, she wakes up every morning and counts her blessings. She is married to a gorgeous man, and is the mother of two wonderful sons. Her other passions in life – besides her family and reading/writing – are music and films.

1. The Man She Can't Forget / One Night With The Sheikh

Book Description Mills & Boon 16/05/2014, 2014. Condition: Very Good. This book is in very good condition and will be shipped within 24 hours of ordering. The cover may have some limited signs of wear but the pages are clean, intact and the spine remains undamaged. This book has clearly been well maintained and looked after thus far. Money back guarantee if you are not satisfied. See all our books here, order more than 1 book and get discounted shipping. . Seller Inventory # 7719-9780263246490

2. The Man She Can't Forget / One Night With The Sheikh

3. The Man She Can't Forget / One Night With The Sheikh

Book Description Paperback. Condition: Fair. A readable copy of the book which may include some defects such as highlighting and notes. Cover and pages may be creased and show discolouration. Seller Inventory # GOR010441677