Items related to Arcology: City in the Image of Man

Soleri, Paolo Arcology: City in the Image of Man

Arcology: City in the Image of Man 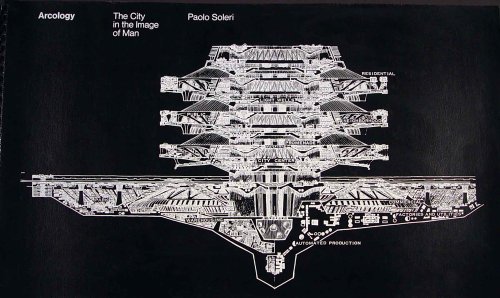 This edition contains all the text and illustrations found in the giant "Arcology, " photographically reduced somewhat to allow a lower price and enhanced handleability."In the three-dimensional city, man defines a human ecology. In it he is a country dweller and metropolitan man in one. By it the inner and the outer are at 'skin' distance. He has made the city in his own image. Arcology: the city in the image of man."--Paolo Soleri

"Essentially, there are three points that set Soleri apart from all other utopian planners groping for the next development in man. His arcologies are new communities, totally unrelated to the old urban centers--not plug-in renewals but revolutionary prototypes for a total break with existing planning patterns or theories."Secondly, Soleri postulates the supremacy of esthetics over structure and technology...."And thirdly, Soleri bases his entire arcology neither on economic, social or industrial considerations but on a philosophical system. It is so all-embracing in its scope that it relates the arcological city units to the entire evolution of organic life, from the proto-biological "Urschleim" (primordial ooze) to an as yet unresolved Neo-Matter. This extremely ramified Biological Humanism, touching on every aspect of human existence, defies summation...."--Sibyl Moholy-Nagy, "Architectural Forum"

Buy Used
Condition: Fair
Jumbo-sized. A - This is a significantly... Learn more about this copy

1. Arcology: the city in the image of man

Book Description MIT Press, 1970. Spiral-bound. Condition: Acceptable. Jumbo-sized. A - This is a significantly damaged book. It should be considered a reading copy only. Please order this book only if you are interested in the content and not the condition. May be ex-library. Seller Inventory # M0262190605Z4

2. Arcology: The City In The Image Of Man

3. Arcology: the city in the image of man