Items related to Fantastic Reality: Louise Bourgeois and a Story of... 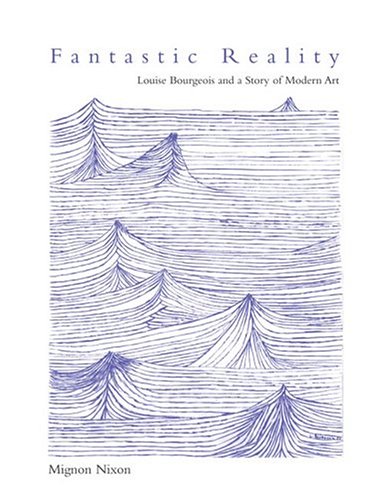 The art of Louise Bourgeois stages a dynamic encounter between modern art and psychoanalysis, argues Mignon Nixon in the first full-scale critical study of the artist's work. A pivotal figure in twentieth-century art, Louise Bourgeois (b. 1911, France) emigrated to New York in 1938 and is still actively working and exhibiting today. From Bourgeois's formative struggle with the "father figures" of surrealism, including Andre Breton and Marcel Duchamp, to her galvanizing role in the feminist art movement of the 1970s, to her subsequent emergence as a leading voice in postmodernism, this book explores the artist's responses to war, dislocation, and motherhood, to the predicament of the "woman artist" and the politics of sexual and social liberation, as a dialogue with psychoanalysis.Convinced that she could express "deeper things in three dimensions," Bourgeois abandoned painting for sculpture in the 1940s, founding her art in one of the twentieth century's most radical and controversial accounts of subjectivity, the object relations psychoanalysis of Melanie Klein. Rejecting the Oedipal narratives of Freud and the dream imagery of surrealism for the object world of the infantile drives, Bourgeois turned to the child analysis pioneered by Klein, the figure Julia Kristeva has called "the boldest reformer in the history of modern psychoanalysis." With Klein, Bourgeois thinks the negative -- fragmentation, splitting, and formlessness -- where we might least expect to find it, in the corporeal fantasies of mother and child. This turn to the mother and the death drive at once in child psychoanalysis, Nixon contends, not only finds powerful expression in Bourgeois's art, but is echoed in the work of other artists, including Marcel Duchamp, Jasper Johns, Yayoi Kusama, and Eva Hesse, and in a return to Klein in recent art."Fantastic reality," Bourgeois calls the condition of her art. Starting from Bourgeois's investigation, through a multiplicity of forms and materials, of the problem of subjectivity on the very threshold of emergence, this book argues for a new psychoanalytic story of modern art.

"Like many of MIT's October series of books, this book is thick with brilliant observations, but it requires a deep familiarity with, and care for, the particulars of international modernism, the full sweep of psychoanalysis and the ends of feminist theory." Publisher's Weekly Online "Nixon has offered, in addition to a psychoanalytic interpretation of Bourgeois's abstract art, a rich repertoire of techniques through which abstract art can be used to probe psychoanalytic thought." Journal of the American Psychoanalytic Association "The brilliant observations that Nixon tosses out on almost every page not only enrich our reading of Bourgeois's art, but reaccess psychoanalytic criticism with a gusto that makes the book required reading." Canadian Art

Eric Vatikiotis-Bateson is Professor of Linguistics and Director of the Cognitive Systems Program at the University of British Columbia.