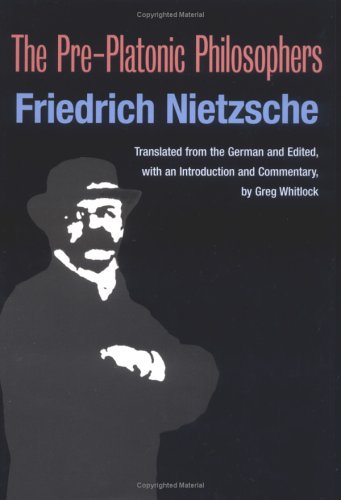 This extraordinary document supplies to English-language readers a missing link in the chain of development of a preeminent nineteenth-century philosopher. "The Pre-Platonic Philosophers" reproduces the text of a lecture series delivered by the young Friedrich Nietzsche (then a philologist) at the University of Basel between 1872 and 1876. In these lectures, Nietzsche surveys the Greek philosophers from Thales to Socrates, establishing a new chronology for the progression of their natural scientific insights. Roughly formulating many of the themes he later developed at length, Nietzsche sketches concepts such as the will to power, eternal recurrence, and self-overcoming and links them to specific pre-Platonics. Greg Whitlock is the first scholar to have wrestled Nietzsche's difficult manuscript into English. This superbly readable translation, complete with Nietzsche's own extensive sidenotes and philological citations, is accompanied by a prologue, an introductory essay, commentary on the lectures, and voluminous bibliographical materials. Whitlock's translation confirms that Nietzsche grouped Socrates with the earlier Greeks, rather than with Plato and other "mixed character philosophers" as many interpreters have claimed. That Nietzsche's philosophical sympathies lay with the pre-Platonics, as opposed to the pre-Socratics, bears substantially on his later rejection of absolutes such as Truth, Knowledge, Beauty, and Being. An overlooked major text of classical studies, "The Pre-Platonic Philosophers" is invaluable both as a record of Nietzsche's views on the early Greek thinkers and as a prefigurement of key aspects of his mature philosophy.

"An excellent translation and commentary on these important texts, important ones not just for Nietzsche's views but for those of the pre-Platonic philosophers themselves." -- Fred W. Burnett, Religious Studies Review ADVANCE PRAISE "A prodigious feat of scholarly research and an important contribution to Nietzsche scholarship. In the future, anyone interested in the evolution of Nietzsche's thought will simply have to pay attention to Whitlock's interpretation." -- Daniel Breazeale, author of Philosophy and Truth: Selections from Nietzsche's Notebooks of the Early 1870s "Greg Whitlock's translation of Nietzsche's lectures on the pre-Socratic philosophers provides the very first access in English to these vital texts. The young Nietzsche's idea of what philosophy can and should (and should not) do is summarized in his readings of Pythagorus, Heraclitus, Zeno, and the rest. The lectures conclude with Nietzsche's first and most compelling reading of Socrates. For the first time the English reader can share this odd but compelling view back to the Greeks from the standpoint of Nietzsche's lectures in 19th century Basel--and share in an understanding of the task Nietzsche set himself as a philosopher." -- Sander Gilman, author of Conversations with Nietzsche: A Life in the Words of His Contemporaries