Items related to The Proud Tower: A Portrait of the World Before the... 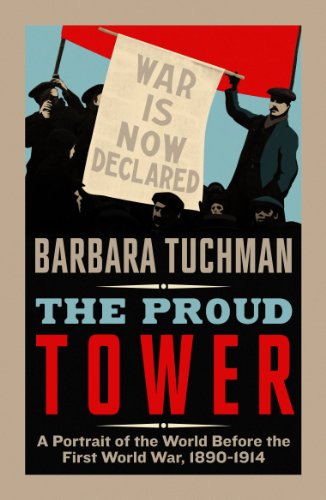 Barbara Tuchman's The Proud Tower is a haunting account of Britain on the cusp of total war - reissued for the 2014 Centenary.

The last government in the Western world to possess all the attributes of aristocracy in working condition took office in England in June of 1895 . . .

In this now classic work, Pulitzer prize-winning historian Barbara Tuchman explores the quarter century leading up to the First World War, from the dying embers of the British aristocracy to the fitful eruptions of the anarchist movement. She provides a compelling portrait of the key figures and conflicting ideologies of this time, giving an intimate view of an epoch that was soon to be swept away by the tide of history.

'Her intention is to make the age alive for us, and in that she abundantly succeeds' Daily Telegraph

'Tuchman has a gift of recreating a period and a mood by an inspired selection of detail and sheer narrative sweep. A volcano of a book' Evening Standard

Barbara Tuchman achieved prominence as a historian with The Zimmerman Telegram and international fame with the Pulitzer-Prize winning The Guns of August. She is also the author of Stilwell and the American Experience in China (also awarded the Pulitzer Prize), A Distant Mirror and The March of Folly. She died in 1989. The Guns of August and The Zimmerman Telegram are published by Penguin.

Tuchman has a gift of recreating a period and a mood by an inspired selection of detail and sheer narrative sweep. A volcano of a book (Evening Standard)

Barbara W. Tuchman (1912-1989) achieved prominence as a historian with The Zimmermann Telegram and international fame with The Guns of August--a huge bestseller and winner of the Pulitzer Prize. Her other works include Bible and Sword, The Proud Tower, Stilwell and the American Experience in China (for which Tuchman was awarded a second Pulitzer Prize), Notes from China, A Distant Mirror, Practicing History, The March of Folly, and The First Salute.