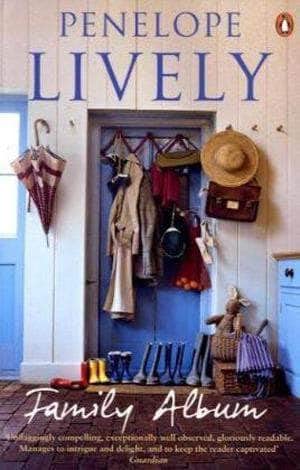 Penelope Lively is the author of many prize-winning novels and short-story collections for both adults and children. She has twice been shortlisted for the Booker Prize: once in 1977 for her first novel, The Road to Lichfield, and again in 1984 for According to Mark. She later won the 1987 Booker Prize for her highly acclaimed novel Moon Tiger. Her other books include Going Back; Judgement Day; Next to Nature, Art; Perfect Happiness; Passing On; City of the Mind; Cleopatra's Sister; Heat Wave; Beyond the Blue Mountains, a collection of short stories; Oleander, Jacaranda, a memoir of her childhood days in Egypt; Spiderweb; her autobiographical work, A House Unlocked; The Photograph; Making It Up; Consequences; Family Album, which was shortlisted for the 2009 Costa Novel Award, and How It All Began. She is a popular writer for children and has won both the Carnegie Medal and the Whitbread Award. She was appointed CBE in the 2001 New Year's Honours List, and DBE in 2012. Penelope Lively lives in London.

Book Description Paperback. Condition: Used; Good. Dispatched, from the UK, within 48 hours of ordering. This book is in good condition but will show signs of previous ownership. Please expect some creasing to the spine and/or minor damage to the cover. Seller Inventory # CHL1046645

Book Description Condition: Very Good. This book is in very good condition and will be shipped within 24 hours of ordering. The cover may have some limited signs of wear but the pages are clean, intact and the spine remains undamaged. This book has clearly been well maintained and looked after thus far. Money back guarantee if you are not satisfied. See all our books here, order more than 1 book and get discounted shipping. . Seller Inventory # 7719-9780241953365

Book Description Paperback. Condition: Used; Good. **Simply Brit** Shipped with Premium postal service within 24 hours from the UK with impressive delivery time. We have dispatched from our book depository; items of good condition to over ten million satisfied customers worldwide. We are committed to providing you with reliable and efficient service at all times. Seller Inventory # 2524729

Book Description Paperback. Condition: Used; Good. stains on some pages. stains on the side **SHIPPED FROM UK** We believe you will be completely satisfied with our quick and reliable service. All orders are dispatched as swiftly as possible! Buy with confidence!. Seller Inventory # 3940874

Book Description Soft cover. Condition: Near Fine. No Jacket. A UK edition (B format 130 x 198 mm) paperback with a single #1 as the number sequence indicating a first printing of this edition. Published byPenguin for The Book People. (The title was first published by Fig Tree in 2009). Unread. Some age tanning to pages. SYNOPSIS: "Allersmead is a big shabby Victorian suburban house. The perfect place to grow up for elegant Sandra, difficult Gina, destructive Paul, considerate Katie, clever Roger and flighty Clare. But was it? As adults, the children return to Allersmede one by one. To their home-making mother and aloof writer father, and a house that for years played silent witness to a family's secrets. And one particular devastating secret of which no one speaks." Packed weight 280gms. IN STOCK FOR IMMEDIATE DESPATCH  . Seller Inventory # 13428

Book Description Condition: Very Good. Shipped within 24 hours from our UK warehouse. Clean, undamaged book with no damage to pages and minimal wear to the cover. Spine still tight, in very good condition. Remember if you are not happy, you are covered by our 100% money back guarantee. Seller Inventory # 6545-9780241953365