Items related to Harold Laski: A Life on the Left

Harold Laski: A Life on the Left 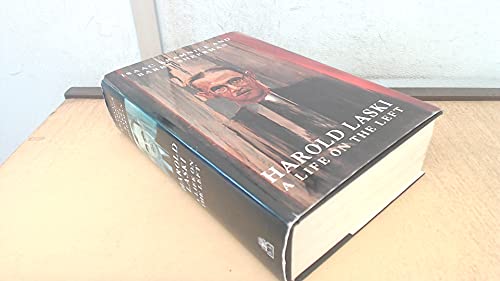 Harold Laski was one of the leading British intellectuals of the 20th century. His life abounded in dramatic confrontations, reversals and triumphs; his teaching and writing transformed the landscape of the democratic socialist left in Britain and the United States. Born in 1893, Harold Laski was one of the creators of the Labour Party. He embodied many of its contradictions. As this biography shows, understanding Laski's life helps explain the Labour Party's weakness today and the whole Left's and Britain's current tormented state. Laski was a passionate socialist committed to "revolution by consensus", and was also the close friend of the great and the good, including American Presidents, Supreme Court judges and all the notable British and European figures on the Left. A tireless scholar and writer, he needed to be centre stage, but was often treated as an outsider. He shaped the Labour manifestoes throughout the 1930s and for the 1945 landslide victory of the party who wanted moderation above all else.

1. Harold Laski: A Life on the Left

Book Description Hardback. Condition: Very Good. The book has been read, but is in excellent condition. Pages are intact and not marred by notes or highlighting. The spine remains undamaged. Seller Inventory # GOR003313382

2. Harold Laski: A Life on the Left

3. Harold Laski: A Life on the Left

Book Description Hamish Hamilton Ltd, 1993. Hardcover. Condition: Good. Small Tears to the Dust Jacket/ Slipcase Good condition is defined as: a copy that has been read but remains in clean condition. All of the pages are intact and the cover is intact and the spine may show signs of wear. The book may have minor markings which are not specifically mentioned. Most items will be dispatched the same or the next working day. Seller Inventory # wbb0015763192

4. Harold Laski: A Life on the Left

Book Description Hamish Hamilton Ltd, 1993. Hardcover. Condition: Used; Good. **Simply Brit** Shipped with Premium postal service within 24 hours from the UK with impressive delivery time. We have dispatched from our book depository; items of good condition to over ten million satisfied customers worldwide. We are committed to providing you with reliable and efficient service at all times. Seller Inventory # 1313832

8. Harold Laski, a Life on the Left

Book Description Hamish Hamilton, London, 1993. Hardcover. Condition: Near Fine. Dust Jacket Condition: Near Fine. First Edition. Block edges are lightly marked. Crisp clean unclipped dust-jacket, fresh covers with gilt lettering on spine, sound binding, clean pages and end-papers. Quantity Available: 1. Shipped Weight: under 1 kg. ISBN: 0241129427. ISBN/EAN: 9780241129425. Pictures of this item not already displayed here available upon request. Inventory No: 14916031116. Prices are discounted on all our books, maps and sheet-music by 20\\% at abebooks during January 2021, please browse our stock for more bargains. International restrictions on shipping from UK. Please contact the seller before placing an order from outside of the UK. Seller Inventory # 14916031116