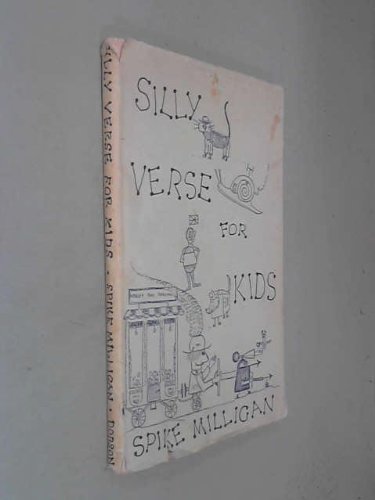 Good, 4th Impression. Tall Slim Royal 8vo. 61pp. Profuse drawings by the author. Very good clean tight sound square, no bookplate, inscription or marks of any kind, joints and hinges firm. Bound in beige matt pictorial boards featuring Spike's trademark illustrations to both upper and lower in blue, and text in black. Together with original unclipped like-pictorial matt dustwrapper, torn to upper leading corner and edge with loss (1") not intruding to title or images. Now housed and protected in transparent removable wrapper. A lovely whimsical volume for reader, scholar and collector alike, and a great gift for fans old and new.

The legendary and iconic figure, Spike Milligan was born at Ahmednagar in India in 1918. He received his first education in a tent in the Hyderabad Sindh desert and graduated from there, through a series of Roman Catholic schools in India and England, to the Lewisham Polytechnic. He then plunged into the world of Show Business, seduced by his first stage appearance, at the age of eight, in the nativity play of his Poona convent school. He began his career as a band musician, but became famous as a humorous scriptwriter and actor in both films and broadcasting. He was the creator, principal writer and performer of the infamous Goon Show. Spike received an honorary CBE in 1992 and Knighthood in 2000. He died in 2002.