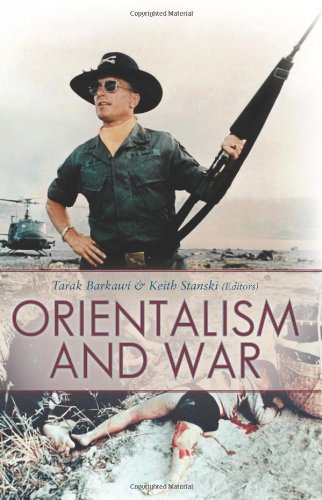 Orientalism is a system of truths that imagines the world can be meaningfully understood in terms of a distinction between 'West' and 'East' from the Greek and Persian Wars onwards. It is also about an institutionalised community of experts who represent with authority this world of East and West, as for example in media and policy discussions of the Islamic sources of terrorism. The papers in this volume, which include chapters by Bruce Cumings, Susan Jeffords, and John Mowitt among others, explore three dimensions of the relations between Orientalism and war. The first concerns the representations of 'Self' and 'Other' that mark the participation of Orientalism in war and which, for example, suffuse media coverage of the War on Terror. Second are the ways in which war is productive of Orientalisms. It is in and through violent conflict that various Western and Eastern identities are defined and come to be taken for granted. The third is about the inverse relation: how Orientalisms amount to acts of war. By redefining politics and identities in such a way as to require a West that brings order to an unstable, violent East, Orientalism is productive of war. Patrick Porter closes the volume in an afterword about the themes explored in these papers and questions for further reflection.

'Tracing the enduring power of Orientalist frames, these essays explore how contemporary wars are still saturated with old assumptions about race, reason and civilisation across the world. Unsettling and disturbing, they are a sobering corrective to the belief that we are inexorably moving beyond the global War on Terror towards post-racial and post-colonial modes of thought.' --Gerard Toal, Professor of Government and International Affairs, Virginia Tech, North Capital Region

'Through scholarly and lively examinations of diverse sites, from the Indian Mutiny of 1857 and Napoleon s occupation of Egypt to the current War on Terror, this volume unravels the multifaceted and often disturbing ways in which the violence of words and war go hand in hand. This is an essential and timely intervention into our understanding of conflict, empire, and the making of truths.' --Julian Go, Associate Professor of Sociology, Boston University

'Orientalism has a history in which projections of superiority and inferiority, fear and desire, repulsion and envy reach extremes that only war can resolve. From Herodotus to Petraeus, Orientalism and war have been cultural bedfellows. Assembling a diversity of views and keenness of inquiry rarely found in a single volume, Tarak Barkawi and Keith Stanski have revitalised the concept of Orientalism to bring a nuanced and complex understanding of how culture has become the killer variable of modern warfare.' --James Der Derian, Professor of International Studies (Research), Brown University

Keith Stanski is a PhD Candidate in Politics and International Relations at the University of Oxford. He is a Visiting Scholar with the Afghanistan Regional Project at New York University's Center on International Cooperation. Tarak Barkawi is a senior lecturer at the Centre of International Studies, University of Cambridge. He specialises in the study of war, armed forces and society with a focus on conflict between the West and the global South. He is author of Globalization and War and many scholarly articles. With Shane Brighton, he is co-editor of the Critical War Studies series, also published by Hurst.

Book Description Columbia University Press, 2013. Hardcover. Condition: Good. Item may show signs of shelf wear. Pages may include limited notes and highlighting. May include supplemental or companion materials if applicable. Access codes may or may not work. Connecting readers since 1972. Customer service is our top priority. Seller Inventory # mon0001415855

Book Description Columbia University Press, 2013. Condition: Good. A+ Customer service! Satisfaction Guaranteed! Book is in Used-Good condition. Pages and cover are clean and intact. Used items may not include supplementary materials such as CDs or access codes. May show signs of minor shelf wear and contain limited notes and highlighting. Seller Inventory # 0231703562-2-4