Items related to Bring Me Men: Military Masculinity and the Benign Facade...

Bring Me Men: Military Masculinity and the Benign Facade of American Empire, 1898-2001 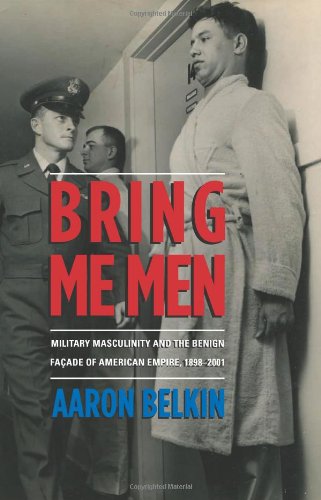 The masculinity of those who serve in the American military would seem to be beyond reproach, yet it is full of contradictions. To become a warrior, one must renounce those things in life that are perceived to be unmasculine. Yet at the same time, the military has encouraged and even mandated warriors to do exactly the opposite. With the expansion of America's overseas ambitions after 1898, warriors have been compelled to cultivate aspects of themselves which under any other circumstances would seem unmasculine. The creation of a masculine armed force therefore has required a surprising degree of engagement with the unmasculine while, at the same time, requiring warriors to maintain a strict disavowal of those very same unmasculine things against which they define themselves. In Bring Me Men, Aaron Belkin explores these contradictions in great detail and shows that their invisibility has been central to the process of concealing American empire's nastiest warts. Maintaining the warrior's heroic image has involved displacing negative aspects of military masculinity's contradictions onto demonized outcasts, especially women, gay men and lesbians, and African Americans. Ironically, these scapegoats of military masculinity have not distanced themselves from the armed forces, but have stabilized the benign facade of empire as they sought to gain admittance to the community of warriors. By examining case studies that expose these contradictions-the phenomenon of male-on-male rape at the U.S. Naval Academy, for example, as well as historical and contemporary attitudes toward cleanliness and filth-Belkin utterly upends our understanding of the relationship between warrior masculinity and American empire and the fragile processes sustaining it.

In this well-researched, comprehensive manuscript Belkin demonstrates rather convincingly the many contradictions and dualities inherent throughout the US military's history when it comes to "turning men into boys" via military service. ...an important, timely contribution in the academic areas of masculinity, gender studies and political science.' - Choice 'One of the smartest analysts of today's US military, Aaron Belkin here challenges the too-simple presumption that an uncomplicated militarised masculinity dominates American soldiers' lives. Instead, through grittily graphic cases, Belkin reveals a dense web of gender confusions and contradictions that foster a culture of obedience inside the military, while nurturing a dangerously undemocratic set of myths among civilians. This is a timely, significant book. (Cynthia Enloe, author of Nimo's War, Emma's War: Making Feminist Sense of the Iraq War)

Probably no single person deserves more credit for the repeal of "don't ask, don't tell" than the author of this book. As director of the Palm Center, Aaron Belkin effectively parried homophobic justifications for excluding gay men and lesbians from the US military, all the while learning unforgettable lessons about the complex culture of military masculinity. This book converts that wisdom into deep scholarship about, and a moral indictment of, the sexual culture at the basis of American military might. This gripping account of the strength and weakness, sadism and masochism, masculinity and femininity, boundedness and porosity, cleanliness and filth that together make up military masculinity - both at the most intimate level of a single troop's corporeality and the vastest expanse of American imperial power - will shock even those who knew all along that inclusion in the US military would be an ambiguous triumph. (Janet Halley, Royall Professor of Law, Harvard Law School)

Aaron Belkin's fascinating, original, and authoritative book overturns conventional wisdom about military masculinity and raises important and troubling questions about warrior identity. He shows that over the past century the US military has instilled not just hypermasculinity but also its opposites - intimacy, femininity, queerness, male rape - to create gender confusion in the ranks and then offer blind obedience to authority as the remedy. A must-read book for anyone interested in gender and war. (Joshua Goldstein, author of War and Gender: How Gender Shapes the War System and Vice Versa)

We tend to assume that military masculinity is made through an often brutal suppression of 'unmasculine' human qualities like empathy, nurturing, compassion. Aaron Belkin explodes that facile narrative, and reveals the contradictions at the core of the warrior's identity. The implications for our understanding of gender and American culture more broadly are profound. (Michael Kimmel, SUNY Distinguished Professor, Department of Sociology)

Just as the racial integration of the American military starting in the Korean War and the gender integration beginning with the current all-volunteer force reflected and helped shape American conceptions of race and gender, so does the recent lifting of the ban on gay men and lesbians serving openly mirror and shape our conceptions of sexuality, and particularly masculinity, in both the military and more broadly in society. Aaron Belkin has been the most prominent analyst of this latter process. This volume reframes our evolving understanding of sexuality and the falsity of the masculine/feminine dualism, and places this process in the context of historical, cultural, and political change in America. (David Segal, Director, Center for Research on Military Organization)

Bring Me Men is a vigorous and fascinating account of military masculinity and its contradictions, its embodiment, and its links to empire. Sometimes funny and sometimes dismaying, Aaron Belkin's book conveys a strong sense of the emotional violence behind the public face of the armed forces. (Raewyn Connell, author of Masculinities)

A tour de force. Belkin reveals the cultural and historical meanings of masculinity in the military of yesterday and tomorrow, including symbolic and psychological contradictions posed by the sex and gender binaries masculine/feminine, strong/weak, dominant/subordinate, victor/victim, civilized/barbaric, clean/dirty, and straight/queer. A great contribution to contemporary scholarship and policy. (Gilbert Herdt, author of Moral Panics/Sex Panics: Fear and the Fight Over Sexual Rights)

AARON BELKIN is Associate Professor of Political Science at San Francisco State University and Director of the Palm Center at the University of California. He was a MacArthur Foundation postdoctoral fellow at the University of California Berkeley and a pre-doctoral fellow at Stanford, and he has published more than twenty-five books, chapters, and peer-reviewed journal articles. His most recent book is United We Stand? Divide and Conquer Politics and the Logic of International Hostility.

1. Bring Me Men: Military Masculinity and the Benign Façade of American Empire, 1898-2001 (Columbia/Hurst)

Book Description Columbia University Press, 2012. Condition: Good. A+ Customer service! Satisfaction Guaranteed! Book is in Used-Good condition. Pages and cover are clean and intact. Used items may not include supplementary materials such as CDs or access codes. May show signs of minor shelf wear and contain limited notes and highlighting. Seller Inventory # 023170285X-2-4

2. Bring Me Men: Military Masculinity and the Benign Facade of American Empire, 1898-2001

Book Description Columbia Univ Pr 2012-11-30, 2012. Hardcover. Condition: Very Good. Item is in very good condition. If supplemental codes/CDs for textbooks are required please contact us prior to purchasing as they may be missing. Seller Inventory # DS-023170285X-2

3. Bring Me Men: Military Masculinity and the Benign Façade of American Empire, 1898-2001 (Columbia/Hurst)